On August 11, 1979, after a week of extraordinary monsoon rains in Gujarat, the two mile-long Machchhu Dam-II disintegrated 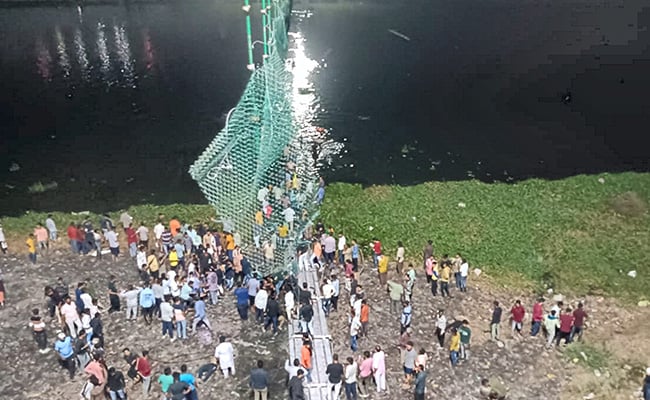 As the Machchhu river turned into a watery grave for many hapless people in Morbi after the collapse of the cable suspension bridge on Sunday, it revived tragic memories of the deadly dam burst in the Gujarat town 43 years ago.

On August 11, 1979, after a week of extraordinary monsoon rains in Gujarat, the two mile-long Machchhu Dam-II disintegrated -- listed as 'worst dam burst' in the Guiness Book of World Records.

The waters released from the dam's massive reservoir rushed through the heavily populated downstream area, devastating the industrial city of Morbi and its surrounding agricultural villages.

The estimates of the number of people killed in the unprecedented tragedy vary greatly ranging from 1,800 to 25,000.

"While no firm figure has ever been set on the disaster's final death count, estimates in the flood's wake ran as high as 25,000," read the 2011 released book "No One Had a Tongue to Speak: The Untold Story of One of History's Deadliest Floods".

Machchhu dam-II was later rebuilt in the end of the 1980s.

For many people, the horrific scenes of Morbi bridge collapse that has claimed over 130 lives evoked painful memories of the Machchhu Dam disaster.

"Nature is cruel. #Morbi has a disastrous relationship with water. Yesterday's #MorbiBridgeTragedy has revived memories of #MacchuDam disaster of 1979. Ironically, #Morbi is one of the places which faces water shortage often," tweeted Deepal Trivedi from Gujarat.

"The infamous "Macchu" Macchu Dam collapse claimed about 20000 human lives and lakhs of cattle and other animals in 1979. Now it claims lives of 100s with the bridge collapse. Pray for the deceased and their families. #Morbi," added Madhup Kumar Pandey from Uttar Pradesh.

While another user Shivkumar Jolad from Pune, hoped that lessons would be learnt by the administration and there won't be any bridge collapses in the future.

"Terrible human tragedy. It is the second worst tragedy in Morbi after the Macchu Dam breach in 1979 (which killed 5-10000 people). Hope lessons are learnt - and not repeat bridge collapse to technical failures," he tweeted.

Police have registered an FIR on charges of culpable homicide against agencies given the task of maintenance and operation of the bridge.