Read inOther Languages
This Article is From Oct 23, 2019

"Lots Of Behind The Scenes Stuff": BJP Tweets Video Of PM-Actors' Meet 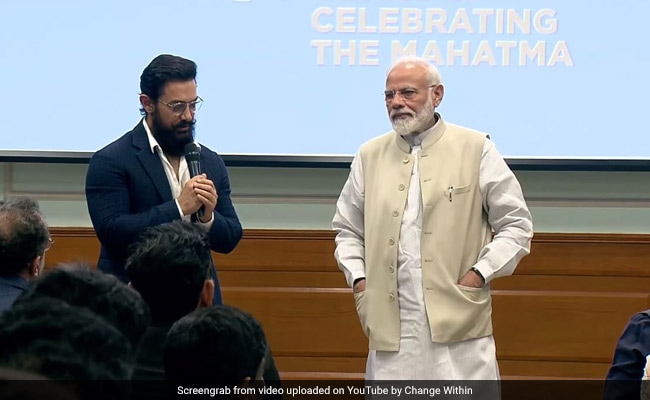 The BJP has tweeted a video of Prime Minister Narendra Modi's freewheeling meeting with Bollywood actors, producers and directors at his official residence in Delhi last week. The actors including Shah Rukh Khan, Aamir Khan, Sonam Kapoor and Jacqueline Fernandez, are seen in the video taking selfies with PM Modi and listening to him speak inside a hall, where on a screen a projector plays an introduction to the 150th birth anniversary of Mahatma Gandhi.

Film director Anand Rai shares a video of what went inside film fraternity's meeting with PM Modi! Lots of unseen footage and behind the scenes stuff.

"I want to hear, if you have any suggestions to give, I want to hear from you," PM Modi told the audience of Bollywood personalities inside a packed hall.

Aamir Khan, in a dark blue jacket, took the microphone and stood beside PM Modi.

"Gandhi ji's wisdom is so great and deep... It is very important to put his thoughts and ideas in front of the world, in front of young people. Every creative person through their work can contribute to nation-building," Aamir Khan.

Next came Shah Rukh Khan's turn to speak. "Thank you sir for calling us here. We actors never come on time, and especially, never get together in one place," Shah Rukh Khan said, drawing laughs. "I truly believe Gandhi ji needs to be reloaded. Gandhi ji 2.0 is what we need," he added.

The nine-minute-long film of PM Modi's interaction with the Bollywood personalities is produced by Rajkumar Hirani Films.

"No one has given the industry so much respect before and recognised the soft power and strength of it. On behalf of the entire industry, I thank PM Modi. We are all going to make sure that Mahatma Gandhi's ideals are channelised," Kangana Ranaut said.

Producer Ekta Kapoor was also present and was among the actors who took selfies with PM Modi.