A police team, along with the National and State Disaster Response Forces, attempted to rescue the trekker but failed, eventually having to call in the Indian Air Force. 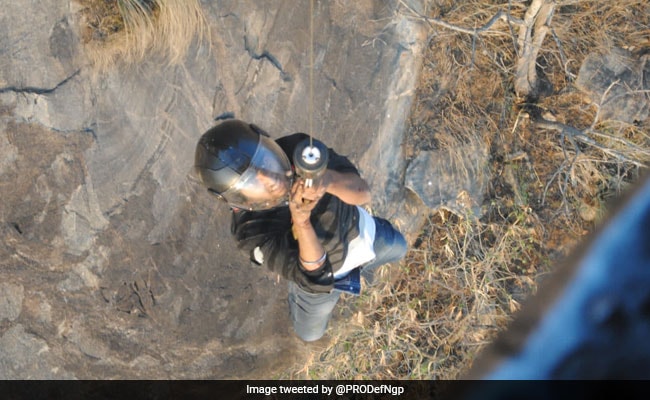 After a search, the Indian Air Force finally located the stranded, immobile 19-year-old.

A trekker who fell at least 300 feet into a gorge at Nandi Hill, about 60 km from Bengaluru, was on Sunday rescued by the Indian Air Force (IAF) and the National and State Disaster Response Forces, a police official said.

The 19-year-old from Delhi, studying in an engineering college in Bengaluru, fell into the gorge and got trapped, Superintendent of Police of Chikkaballapura GK Mithun Kumar told PTI.

"Nishank had come alone for trekking and fell into the gorge. After slipping, he fortunately got stuck. Had he slipped from there, he would have fallen into a cliff of about 300 feet below," Mr Kumar said.

He said the youth messaged the police control room and shared his location. Soon, a police team, along with the SDRF and NDRF, went to the rescue but none could help. "Then, we contacted the IAF which rushed to the rescue," the police officer added.

A statement from the defence said the Deputy Commissioner of Chikkaballapura contacted the Air Force Station, Yelahanka, with a 'Save Our Souls' (SOS) message about a young trekker stuck in Bramhagiri Rocks in Nandi Hills after slipping and falling 300 feet below. A Mi17 helicopter was sent.

After a search and guidance of the local police, the IAF was able to locate the stranded, immobile victim, the statement said. The terrain being treacherous for a landing, the flight gunner of the Mi17 was lowered by a winch close to the trekker. The flight gunner helped him harness and lifted him up.

The onboard air force medical assistant attended to the survivor while the helicopter flew him to Yelahanka from where he was taken to the nearest civil hospital, the statement said.

He was winched up by crew safely & taken to Civil hospital after on borad medical assistance. pic.twitter.com/YtE2lh78g3

Police say usually people from various places, especially from Bengaluru, go for trekking on weekends. Similary, early this month, a person got trapped between rocks in Palakkad, Kerala, and the help of the defence forces and the NDRF was sought.