The Bill was passed by the Lower House after rejecting several amendments that were moved by the opposition. 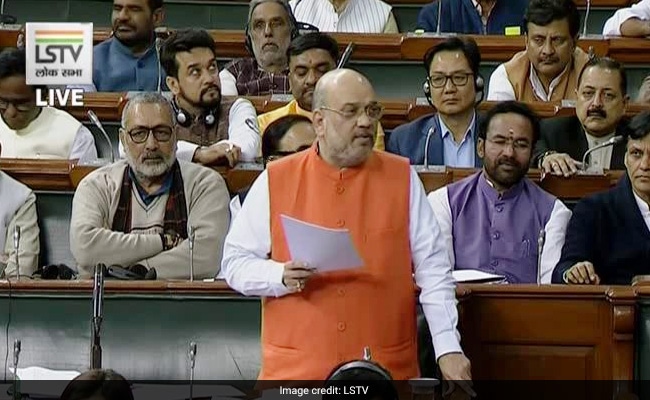 A bill seeking maximum punishment of life imprisonment for manufacturing and carrying illegal arms was approved by Lok Sabha on Monday.

Piloted by Home Minister Amit Shah, the Arms (Amendment) Bill, 2019 also ensures that those using firearms in a rash or negligent manner in celebratory gunfire, endangering human lives or personal safety of others, shall be punishable with an imprisonment to two years or with fine which may extend to Rs one lakh or with both.

The Bill was passed by the Lower House after rejecting several amendments that were moved by the opposition.

Replying to a nearly three-hour-long debate, Mr Shah said the bill has been brought as a requirement to significantly impose weapons' control in the country.

The Home Minister said that the bill has accorded special status to sportsperson who need firearms and ammunition for practice and participating in tournaments.

"They (sports persons) will be entitled to get licences for different types of firearms," Mr Shah added.

Under the proposed provision, a person can have a maximum of two firearms, as against the present norm of three, he added.

"Many suggestions came including keeping two firearms by an individual. I have moved an official amendment in this regard also," he said.

According to the bill, those who own more than two firearms will have to deposit the third one with authorities or authorised gun dealers within 90 days for de-licensing once the amendment is approved by Parliament.

"There were many discrepancies in the six-decade-old law making crime control difficult," he said.

Amit Shah said that there is a provision for life imprisonment for those who snatch or loot arms and ammunition from police or defence forces.

The bill seeks to enhance punishment for illegally possessing and making prohibited arms, besides other changes in the six-decade-old Arms Act.

As per the bill, the government proposes to amend Section 25 (1AA) of the Arms Act, 1959, to give punishment from the usual life term of 14 years to "imprisonment for the remainder of that person's life" for manufacturing, selling, repairing and possessing "prohibited" arms. The minimum punishment under this section will be 14 years.

Under the present law, the offence invites imprisonment of not less than seven years but may extend to life imprisonment - mostly up to 14 years.

According to an estimate, India has a total of around 35 lakh gun licences. Thirteen lakh people have licences to carry weapons in Uttar Pradesh, followed by Jammu and Kashmir, where 3.7 lakh people possess arms licences, most of which were taken in the name of personal security.

Punjab, which witnessed terrorism in 1980s and 1990s, has around 3.6 lakh active gun licences, most of which were issued during the two decades of conflict.