Our Resolve Is To Strengthen Economy, Security: PM Modi In Karnataka-Highlights

PM Modi said his party's resolve is to strengthen the nation's economy, security and infrastructure, amid loud cheers from the crowd. 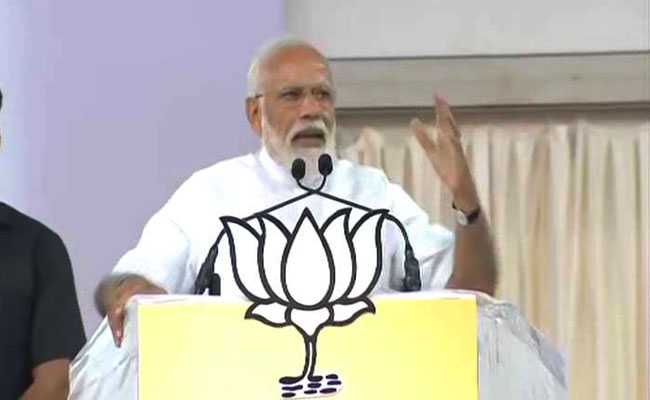 Prime Minister Narendra Modi spoke at an election rally in Karnataka's Mysuru today. At the rally, PM Modi said his party's resolve is to strengthen the nation's economy, security and infrastructure, amid loud cheers from the crowd

PM Modi also addresed a joint rally with Uddhav Thackeray at Ausa in Osmanabad, a constituency governed by the BJP ally Shiv Sena. This will be the first joint rally of both the leaders in Maharashtra.

Here are the Highlights of the PM Modi rally:

Apr 09, 2019 17:51 (IST)
Will ensure constitutional protection to topics of faith
The BJP feesl the same way about Sabarimala as you do. Our entire effort will be to keep the theme of Sabarimala, tradition and worship system in front of the Supreme Court in detail. We will strive to ensure constitutional protection to topics of faith and faith
Apr 09, 2019 17:32 (IST)
Our resolve is to strengthen India, says PM Modi
We have a resolve, we will strengthen India's security, our army. We resolve to make India one of the top three economies by 2030. We resolve to expand the new infrastructure of new India, to lay metro lines in 50 cities in the country
Apr 09, 2019 17:26 (IST)
PM Modi elaborates government achievements in Karnataka
Have adopted the "Sabka Saath mantra...". Our policies have greatlly benefited people. i have been able to take the decisions to strengthen the nation only because of your support and confidence.
Apr 09, 2019 15:16 (IST)
Congress created divide based on religion, says PM Modi
For votes, Congress has created divide in the society based on religion and caste. They did same in Karnataka during state assembly elections
Apr 09, 2019 15:13 (IST)
"They neither respect soldiers, nor science": PM hits out at the opposition
Just like air strike, they also raised questions on strike in the space. They didn't have the courage to sanction missile tests. They neither respect soldiers and nor science. It's about time to teach a lesson to such parties and people
Apr 09, 2019 12:26 (IST)

"Same language as that of Pakistan": PM Modi attacks Congress over its manifesto pic.twitter.com/pyw5c8AFUm