CJ Chavda, a veterinary doctor, who went on to become a deputy collector before joining politics, believes that the fight is between the Congress and the BJP and not Amit Shah and him. 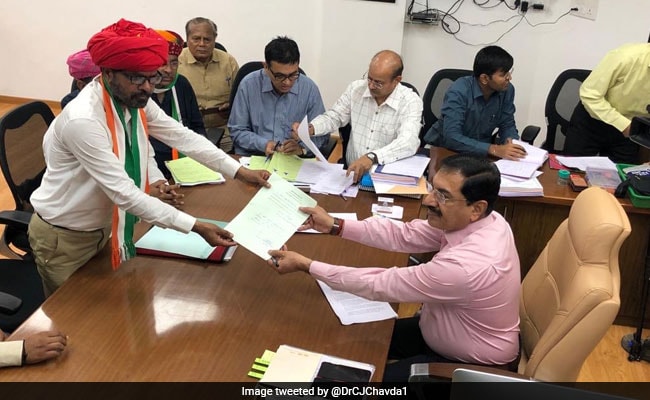 CJ Chavda, an MLA from Gandhinagar North seat, belongs to the Thakor community.

The Congress, which had in the past fielded popular figures like former CEC TN Seshan and actor Rajesh Khanna from Gandhinagar Lok Sabha seat, has this time given ticket to its two-time MLA, CJ Chavda, for whom taking on BJP chief Amit Shah seems to be an uphill task.

There is a talk in political circles that although the seat has been a BJP bastion from 1990s, a strong opponent could have given a tough fight to Mr Shah.

In the past, the Congress had fielded T N Seshan, Rajesh Khanna and former state DGP P K Dutta from this high profile seat against BJP stalwarts like L K Advani and AB Vajpayee.

The constituency has the highest number of 19.21 lakh voters among all the 26 constituencies in Gujarat. It comprises seven assembly segments- Gandhinagar North,Kalol, Sanand, Ghatlodiya, Vejalpur, Naranpura and Sabarmati.

In the 2017 Assembly elections, the five urban seats - Ghatlodiya, Vejalpur, Naranpura, Sabarmati and Sanand - went to the BJP, while the two semi-rural constituencies of Gandhinagar North and Kalol were won by the Congress.

Mr Chavda, an MLA from Gandhinagar North seat, belongs to the Thakor community which has been a strong supporter of the Congress.

Mr Chavda, a veterinary doctor, who went on to become a deputy collector before joining politics, believes that the fight is between the Congress and the BJP and not Amit Shah and him.

"Do not call it a fight between Amit Shah and CJ Chavda. This is a contest between the Congress and the BJP. If he is the national president of the BJP, then why did he choose the so-called safe seat in Gujarat. He could have contested from a challenging seat," Mr Chavda said.

"Our leaders had come to Gandhinagar recently (on March 12) and held a mega rally in Gandhinagar, which was attended by lakhs of people. The rally has shown that everything is not right for the BJP in Gujarat. We will give a tough fight to the BJP," he added.

Mr Shah has earlier said that fighting election from the Gandhinagar seat, where Vajpayee and Advani, had contested and won, was a matter of pride. He also belongs to the same region, unlike the other two leaders.

In the past, Mr Shah had won the Gujarat Assembly elections four times from Sarkhej constituency (before delimitation), and once from Naranpura seat (after delimitation), both of which are part of Gandhinagar Lok Sabha seat.

In the past, he had acted as in-charge of Gandhinagar Lok Sabha seat for Advani, when the national leader was busy campaigning for the BJP in other parts of country in 2009.

When Mr Shah was asked about the chances of his victory during his road-show held last Saturday, he had said, "Look at the crowd in the road-show, which itself will tell you who is going to win the seat."

In the 1999 general election, the Congress had fielded TN Seshan, former Chief Election Commissioner, credited for transforming the Election Commission (EC) in the 1990s, against Advani from Gandhinagar. Seshan managed to give a credible fight to LK Advani.