Although Amit Shah's roadshow covered a distance of just over a kilometre, it passed through all the areas that Shatrughan Sinha has been associated with since childhood. 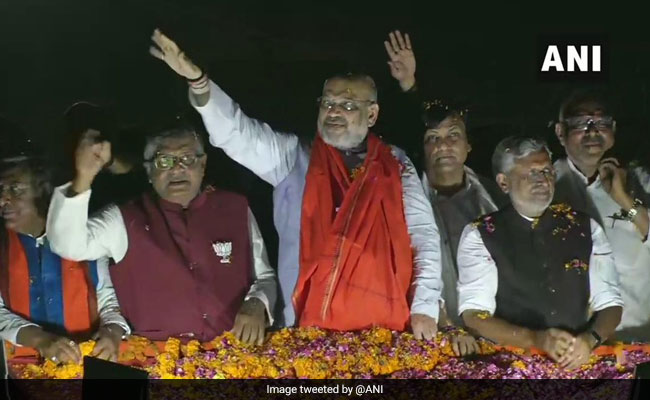 Amit Shah was accompanied by Ravi Shankar Prasad and Sushil Kumar Modi at the rally.

BJP chief Amit Shah today took out a roadshow in Bihar's Patna Sahib Lok Sabha constituency to support Union Minister Ravi Shankar Prasad in a high-profile contest against actor-turned-politician Shatrughan Sinha in the ongoing Lok Sabha elections. Mr Sinha had quit the BJP for the Congress earlier this year after not being granted a ticket from the constituency.

Amit Shah was accompanied by Mr Prasad and Bihar Deputy Chief Minister Sushil Kumar Modi during the event, among others.

Although the roadshow covered a distance of just over a kilometre, it passed through all the areas that Mr Sinha has been associated with since childhood. Sources in the BJP said the route was chosen to prove a point that whatever support Mr Sinha claims to have in Patna Sahib came solely from his past affiliation to the ruling party.

The actor-turned-politician, who starred in several popular Bollywood movies such as Kala Patthar, Badla and Dost in the 1970s, had reacted to Amit Shah's plan to hold the Patna Sahib roadshow with characteristic ferocity. "Some people say that he is coming here to show me my aukaat (worth). This is going to backfire. It seems the BJP has not learnt its lessons from the assembly polls of 2015 when the DNA remark cost the National Democratic Alliance dearly," Mr Sinha was quoted as saying by news agency PTI.

Mr Sinha, popularly known as "Bihari Babu", had defeated Congress candidate Kunal Singh by over two lakh votes to retain Patna Sahib in the 2014 general elections. Mr Prasad, on the other hand, is a Rajya Sabha candidate from Bihar.

Many were taken aback when details of Amit Shah's roadshow were released to the media on Wednesday. He had chosen one of the shortest routes through the constituency, but ensured that it passed through all the places where Mr Sinha had spent his childhood growing up. Accordingly, the roadshow started off from the Kadamkuan Durga Temple, just a few metres from the former actor's ancestral home, before passing through Sahitya Sammelan, Thakurbari road, Bakarganj and Baripath. It finally culminated at Udyog Bhavan.

Patna Sahib will vote in the seventh phase of the Lok Sabha elections, on May 19.