To Take On BJP After Pulwama, Grand Alliance May Rewire Connections

Lok Sabha elections 2019: Weeks ago, the opposition seemed like a jumble of contradictions, pledging to work together despite their rivalries in states

To untangle the AAP-Congress mess, Mamata Banerjee is said to have launched fresh efforts

Developments after the Pulwama terror attack, including India's air strikes in Pakistan's Balakot targeting terror, may have forced an opposition rethink on alliances to take on the ruling BJP as a strong bloc in the national election due by May.

Weeks ago, the opposition seemed like a jumble of contradictions, pledging to work together despite their rivalries in states. But various parties are keen on a do-over, sources say.

Arvind Kejriwal has accused Rahul Gandhi of rejecting any tie-up with his party and has even announced candidates in six of the seven parliamentary seats in Delhi.

To untangle the AAP-Congress mess, Mamata Banerjee is said to have launched fresh efforts. It was the Bengal Chief Minister who had, after an opposition pow-wow in Delhi in January, told the media that Rahul Gandhi and Arvind Kejriwal had been urged to work on their differences and attempt an alliance in Delhi. 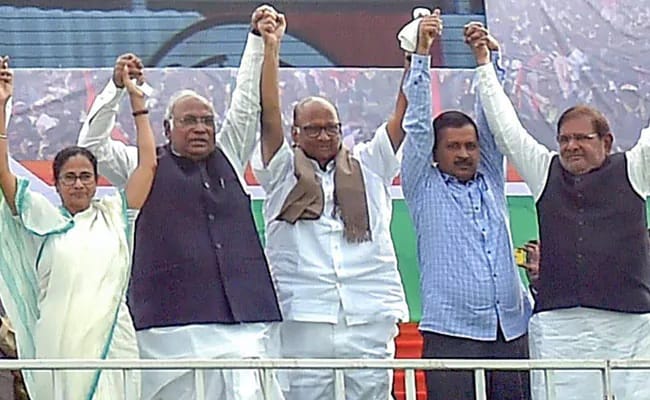 The Trinamool leader may set an example by brushing her differences with the Congress under the carpet for now. Sources say the two parties may explore an understanding in some of Bengal's 42 parliamentary seats.

Interestingly, the Trinamool arch-rival in Bengal, the CPM, has talked of an understanding with the Congress in six seats in Bengal. "The central committee has decided that there are today six sitting seats which are neither BJP nor Trinamool in the Lok Sabha, four are Congress and two of CPI(M). We have decided that in these six seats there should not be a mutual contest," said CPM leader Sitaram Yechury.

The CPM and the Congress may, however, clash over Raiganj; both have strong candidates for the seat. Congress's Deepa Dasmunsi held the seat for three terms while CPM's Mohd Salim is the current parliamentarian.