The crowds seen at several cinema theatres across Andhra Pradesh these days are for the shows of "Yatra", the film in which Malayalam superstar Mammootty plays the role of YSR.

Elections are the time for free-flowing freebies from parties and candidates, from rice to household appliances to liquor or even cash. In Andhra Pradesh, Jagan Reddy's YSR Congress is offering voters an experience. More specifically, snacks and a movie.

The movie is a biopic of Jagan Reddy's father and former chief minister YS Rajasekhara Reddy aka "YSR". One is taken to the theatre in an autorickshaw or a special bus, treated to a film and free snacks. For the grand finale, one is sent home with a token amount in the pocket of Rs 100, a few people admitted in private.

The crowds seen at several cinema theatres across Andhra Pradesh these days are for the shows of "Yatra", the film in which Malayalam superstar Mammootty plays the role of YSR.

The YSR Congress booth managers organise the movie tickets and distribute them in neighbourhoods. The tickets come with coupons for free snacks and a soft drink. Transport is also paid for, so for families, it is a fun day out during the summer break.

The film traces the political journey of YSR in 2003-2004, when he went on his famous "padyatra" or march across the state and capped it by becoming chief minister in May 2004, ending N Chandrababu Naidu's rule in undivided Andhra Pradesh.

Jagan Reddy has just completed a "padyatra" that covered more than double the distance that his father travelled. He plans to defeat the same adversary this time, and believes he had made inroads. YSR Congress campaign managers are more than thrilled at being able to use cinema to send across a political message during election season. 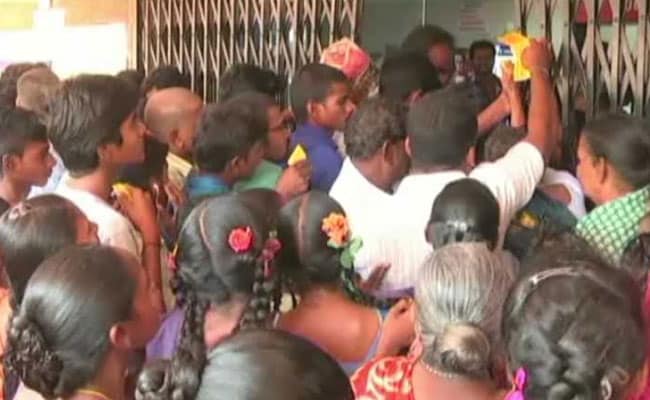 For the grand finale, one is sent home with a token amount in the pocket of Rs 100, few people admitted in private

"The cast of Vijayamma, who plays YSR's wife and KVP, YSR's close friend and confidante, is superb. It will bring back and reinforce the image of YSR as a man with many admirable qualities, someone who could stand up for his beliefs and as a leader who was much loved,'' said a YSR Congress leader.

More than once in the film, Mammootty's "YSR" says "Nenu vinnanu, nenu vunnanu (I have heard and I am there for you)." Jagan Reddy has been using the phrase in his public meetings, to reinforce that he is just like his father, who had the image of a do-gooder for the poor with several welfare schemes.

In the bitter campaign for the national election, there have been plenty of biopics. There are two on legendary actor and former chief minister NT Rama Rao. One of them, made in two parts, has NTR's actor-son and popular hero Balakrishna playing him; Vidya Balan plays his first wife Basava Tarakam and Rana Daggubati plays Chandrababu Naidu. Balakrishna is a Telugu Desam Party legislator whose daughter Brahmini is married to Chandrababu Naidu's son Nara Lokesh. Balakrishna is the sitting lawmaker from Hindupur and has once again been fielded from there.

The second film on NTR is by Ram Gopal Verma and has the backing of NTR's second wife Lakshmi Parvati, who is now with the YSR Congress. The TDP is apprehensive about the portrayal of Chandrababu Naidu in this version of NTR's story.

Bhagyamma, who watched "Yatra" with friends and children from the neighbourhood, gushed: "The film is super and we thoroughly enjoyed ourselves."

Ravanna also watched the film. "Not just my family and I, the entire neighbourhood was taken to the film. We were also given samosas and snacks at the theatre. We enjoyed ourselves,'' he said.