Only "Shorts And Lathi" Needed To Run A University Now: Rahul Gandhi

Lok Sabha Elections 2019: "PM Narendra Modi has reduced the Prime Minister's Office to the status of Publicity Minister's Office as he is busy marketing himself," Rahul Gandhi said during an interaction with students. 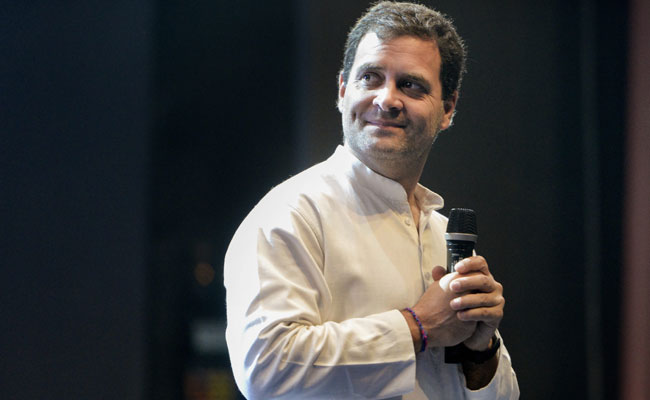 Prime Minister Narendra Modi has reduced the PMO to Publicity Minister's Office for marketing himself, Congress president Rahul Gandhi alleged on Wednesday, as he launched a vitriolic attack on his rival over a host of issues including unemployment and notes ban.

Unsparing in his attack, Mr Gandhi also wondered whether the Prime Minister ever studied at a university, and alleged educational institutions were undergoing saffronisation under his watch.

Addressing a public rally and holding an interaction with students in the Manipur capital Imphal, the Congress leader raked up the issue of now lapsed Citizenship (amendment) Bill, accusing the Modi government of reneging on its ''act east policy'' and attacking the culture and ethos of the people of the Northeast.

Attacking PM Modi over alleged loss of employment opportunities, the Congress leader said the Prime Minister had claimed on taking over the reins of the government that two crore jobs will be created every year, but one crore jobs were lost in 2018 alone. Over 30,000 jobs were lost on an average every day, he claimed.

"In 2018, Prime Minister Narendra Modi destroyed one crore jobs. This is the scale of his incompetence. It is absurd and ridiculous that the PM promises giving two crore jobs," Mr Gandhi told the election rally.

During his interaction with students, the Congress president claimed nobody knew whether PM Modi ever went to a university.

"We still have no access to his university degree. Nobody actually knows if he went to university or not. There is an RTI (application) in Delhi seeking PM's degree but it has not been responded to," Mr Gandhi said, adding "the Prime Minister is imposing mediocrity on a sophisticated country".

Speaking about the unrest at the Manipur University last year after students and teachers demanded the removal of the then vice chancellor AP Pandey over his alleged "anti-academic activities", Mr Gandhi said he was happy that the people of Manipur succeeded in forcing him out. The protests for the ouster of AP Pandey, who allegedly had RSS links, had led to the closure of the university for three months.

"He (Pandey) was imposed on you. The only qualification to run a university (now) is to wear a pair of shorts, wield a ''lathi'' (stick) and spread hatred," Mr Gandhi said, in an oblique reference to the RSS.

Calling notes ban a "ridiculous" decision, he said, "One fine morning, he (Modi) got up and decided to carry out demonetisation. Is this a joke? Destroying people's lives?" he said.

Targeting BJP president Amit Shah over his assertion that the Citizenship Bill will be re-introduced if the BJP forms the next government, the Congress leader dubbed it as an attack on the culture of the Northeast.

"His (Modi's) party president (Amit Shah) says Citizenship Bill will be imposed on the people of Manipur and the Northeast. These people are attacking your culture. We did not allow the bill to pass. The Congress will defend your culture and the bill will not be passed...it will never become a law," he told the rally.

He said every state has its unique voice and it should be heard and respected.

"There is an ideological war going on. The RSS-BJP combination does not listen to or consider the views of others. On the contrary, the Congress is aware of every state's uniqueness and recognises their place in the country," he said.

Accusing the Modi government of neglecting the Northeast, the Congress leader said the Prime Minister's words do not match his acts. "Don't only look east, but act east," he said.