Lok Sabha Elections 2019: Amit Shah said Rahul Gandhi "fled" to Kerala's Wayanad as he fears that the voters of Amethi an account of work done by him and his party. 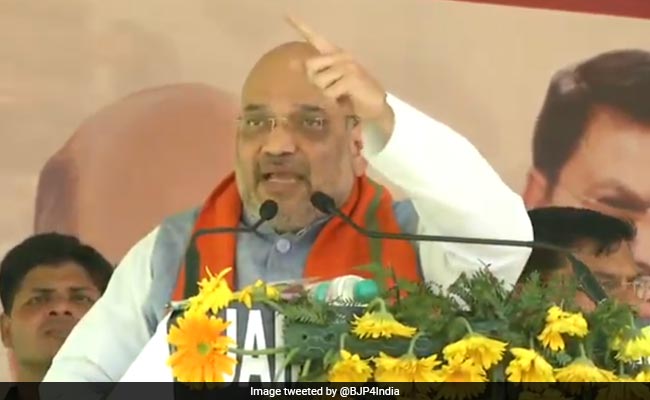 BJP chief Amit Shah on Sunday took a dig at Congress president Rahul Gandhi after it was announced that the latter is contesting the national election from Wayanad, the hilly district in northern Kerala, apart from Amethi in Uttar Pradesh. Mr Shah said Rahul Gandhi "fled" to Kerala as he fears that the voters of Amethi will seek an account of work done by him and his party.

"I read on WhatsApp that Rahul Gandhi has run towards Kerala, leaving Amethi behind. Why has he escaped to Kerala? All of you know that this time Rahul Gandhi is done for in Amethi. So he is going to Kerala in a bid to win on the politics of polarisation," Amit Shah said at his first election meeting in western Uttar Pradesh's Dhampur.

Mr Gandhi, who has been representing Amethi since 2004, won the seat by a reduced margin in the 2014 Lok Sabha polls by defeating Union Minister Smriti Irani. Ms Irani is challenging him again in the constituency this election. In the 2017 Uttar Pradesh election, the Congress lost four of the five assembly segments that fall in the Amethi parliamentary seat.

Ms Irani had attacked Mr Gandhi last week, saying the 'Rahul Gandhi-for-south' demands were staged as the people of people in Amethi have rejected him. "Amethi drove him away. Calls requesting him to contest from other seats are being staged as people have rejected him," the BJP leader had tweeted in Hindi.

The ruling Left in Kerala seemed unperturbed about Rahul Gandhi's choice of Wayanad. "Rahul Gandhi is contesting against the Left in Kerala. The Left Democratic Front of Kerala has the strength to face anyone who is coming to challenge us," Chief Minister Pinarayi Vijayan tweeted.

By choosing Wayanad, Rahul Gandhi will be contesting from a seat that, in a way, represents three southern states, Mr Surjewala said. Wayanad shares borders with Karnataka and Tamil Nadu.