Election 2019 Highlights: In Ayodhya, PM Modi Says We Are Fighting Against Poverty

PM Modi addressed a rally in Maya Bazaar area, which is just 25 km from the disputed site. PM Modi addresses a rally near Ayodhya for the first time in 5 years.

Prime Minister Narendra Modi and Uttar Pradesh's grand alliance leaders Akhilesh Yadav and Mayawati today had a face-off in a place close to Ayodhya, the temple town part of the Lok Sabha seat that has been the centre of the Ram Janmabhoomi-Babri Masjid dispute. This is the first time since coming to power in 2014 that PM Modi visited the area - a move that's expected to fuel the claims of right-wing groups and allies like the Shiv Sena that the BJP uses the temple issue to draw votes.

PM Modi addressed a rally in Maya Bazaar area, which is just 25 km from the disputed site. But for the national election, Maya Bazaar falls under the neighbouring Ambedkar Nagar parliamentary seat and not the Faizabad seat.

Here are the Highlights from the Lok Sabha Elections 2019:

Today is a day that would make every Indian proud!

I thank the global community and all those who believe in humanitarian values for their support.

India's fight against terror will continue. We will work towards peace and brotherhood in our planet. pic.twitter.com/U7vzgfjZPx

May 01, 2019 20:22 (IST)
Prime Minister Narendra Modi addresses a rally in Jaipur, Rajasthan.
He says: "UNSC has listed Masood Azhar as a global terrorist. In our fight against terrorism, it is a big victory."
May 01, 2019 18:24 (IST)
Delhi Chief Minister Arvind Kejriwal holds a road show in Azadpur area, in Chandni Chowk constituency.
May 01, 2019 17:33 (IST)
PM Narendra Modi in Itarsi, Madhya Pradesh, says: "One of the first things the Sri Lankan government did after the blasts was to ban Zakir Naik's TV channel. This is the same Zakir Naik in whose 'durbar' Diggi Raja was once seen. Doob maro Congress walon (Congress leaders should drown themselves)
May 01, 2019 16:59 (IST)
Samajwadi Party's Akhilesh Yadav on rejection of Varanasi candidate's nomination says: "When they are asking for votes in the name of nationalism, they should have faced a soldier. People who dismissed him from his job because he complained about food, how can those people be called real patriots?"
May 01, 2019 16:40 (IST)
The Congress expresses disappointment over the Election Commission's clean chit to Prime Minister Narendra Modi for his speech in Wardha, saying it has become "crystal clear" that the model code of conduct has become the "Modi Code of Conduct".
May 01, 2019 16:10 (IST)
Rajesh Gupta, Tej Bahadur Yadav's lawyer, tells news agency ANI: "We had submitted the evidence that was asked from us. Still, the nomination was declared invalid. We will go to the Supreme Court."
May 01, 2019 15:58 (IST)
Tej Bahadur Yadav Says Will Go To Top Court
Samajwadi Party candidate from Varanasi, Tej Bahadur Yadav, tells news agency ANI: My nomination has been rejected wrongly. I was asked to produce the evidence at 6:15pm yesterday, we produced the evidence, still my nomination was rejected. We will go to the Supreme Court."
Dismissed soldier Tej Bahadur Yadav, who has been fielded by the Samajwadi Party from Varanasi against Prime Minister Narendra Modi, was sent a notice by the Election Commission. The Border Security Force man had been dismissed for his public allegations about the quality of food served.
In its letter, the Commission on Tuesday said employees of the state or central government who have been dismissed for "corruption or disloyalty to the state" shall be disqualified from campaigning for a period of five years.
May 01, 2019 15:53 (IST)
Priyanka Gandhi offers prayers at a temple in Bahrampur, Raebareli.

May 01, 2019 15:34 (IST)
Prime Minister Narendra Modi, while addressing a rally in Kaushambi says: "When Jawahar Lal Nehru came to the Kumbh Mela, there was a stampede due to lack of facilities. However, to save the face of the government, the media that time did not have the courage to show it."
May 01, 2019 13:14 (IST)
AAP candidate from East Delhi Lok Sabha seat, Atishi, campaigns in Vishwas Nagar area of the constituency.

May 01, 2019 12:13 (IST)
Ayushman Scheme Introduced
I understand the pain of the poor people, I understand their illness. To fight this I have introduced the Ayushman Scheme," PM Modi said.
May 01, 2019 12:11 (IST)
BJP Worked For Poor People
"No chaiwala wants his child to become a chaiwala. The poor want to grow and thrive," the PM said at the rally, adding that the BJP has worked for the upliftment of the poor.
May 01, 2019 12:04 (IST)
PM Modi Addresses In Ayodhya
Addressing an election rally in Ayodhya PM Modi said that the law and order situation under the BJP has improved.
May 01, 2019 11:43 (IST)
Priyanka Gandhi Vadra meets supporters in Baghola, Raebareli 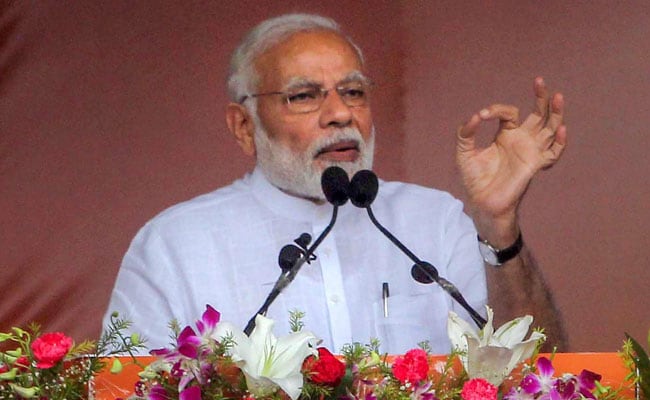 May 01, 2019 09:39 (IST)
Ex-Soldiers Gets Election Body Notice
Dismissed soldier Tej Bahadur Yadav, who has been fielded by the Samajwadi Party from Varanasi against Prime Minister Narendra Modi, has been sent a notice by the Election Commission. The Border Security Force man had been dismissed for his public allegations about the quality of food served.
May 01, 2019 09:31 (IST)
Those Responsible For Protecting Nation Creating Chaos: Jaya Bachchan
Samajwadi Party leader Jaya Bachchan claimed that the person responsible for safeguarding the country is the one who is creating chaos and disorder, in an apparent reference to Prime Minister Narendra Modi. "At this point in time, the one who is responsible for protecting the nation is the one who is creating chaos and disorder," she said while addressing a rally on Tuesday.
May 01, 2019 09:20 (IST)
Gujarat Unit Chief Barred From Campaigning
Jitubhai Vaghani, the BJP's Gujarat unit chief from Gujarat has been barred from campaigning in the ongoing national election for violating the model code of conduct during his election campaign held at Amroli in Surat.
May 01, 2019 09:19 (IST)

Telangana: People pay last tribute to Nandyal MP and Jana Sena Party candidate from the constituency, S.P.Y. Reddy, at his residence. He passed away at a hospital in Hyderabad last night. pic.twitter.com/PC676zQOhM

Prime Minister Narendra Modi and Uttar Pradesh's grand alliance leaders Akhilesh Yadav and Mayawati will today face off in a place close to Ayodhya, the temple town part of the Lok Sabha seat that has been the centre of the Ram Janmabhoomi-Babri Masjid dispute.