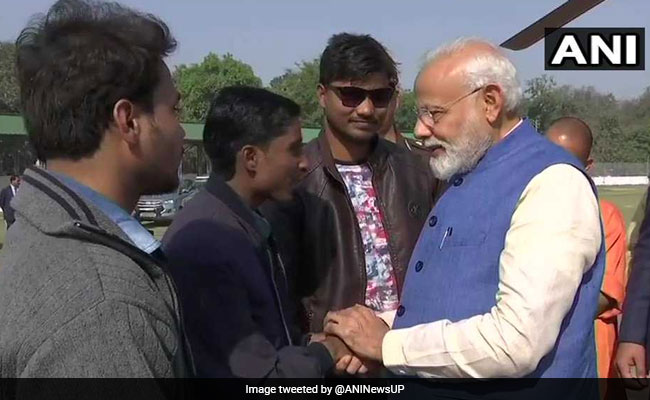 Ahead of the upcoming Lok Sabha elections, the AIADMK is likely to tie-up with the BJP in an electoral deal today. On Monday, the Shiv Sena also sealed its alliance with the ruling party for the national election and the subsequent assembly elections, after three years of unrestrained attacks on Prime Minister Narendra Modi and the BJP.

Karnataka Chief Minister HD Kumaraswamy on Monday ripped into Prime Minister Narendra Modi's remark that the opposition alliance is "adulterated" and contended that the BJP's choice of allies is far more questionable. "Narendra Modi's alliance with Nitish Kumar after the mandate of Bihar citizens - is that a holy alliance?" Mr Kumaraswamy said. The BJP's efforts to strike a deal with the AIADMK is also equally questionable, he added.

Meanwhile, Prime Minister Narendra Modi is expected to visit the Kumbh Mela in Prayagraj today. He is in his Lok Sabha constituency Varanasi in Uttar Pradesh to launch various projects. PM Modi will also visit Tamil Nadu where he will address a rally and inaugurate a four-lane national highway in Kanyakumari.

Here are the LIVE Updates from election campaigning:

Feb 19, 2019 18:08 (IST)
DMK Chief M K Stalin flayed the AIADMK-PMK alliance, saying it was formed not for the benefit of the country, but for monetary gain.

"The AIADMK-PMK alliance has been formed without a thought for the country or the people...They have forged an alliance only for money", he alleged.

Recalling that PMK founder S Ramadoss had slammed AIADMK leaders in public and through statements, he told reporters that Ramadoss had even penned a book on alleged irregularities of (Chief Minister) K Palaniswami and late AIADMK supremo J Jayalalithaa.

"Today he is sharing the dais with such people (Palaniswami). Don't you have any shame?" he asked.

Mr Stalin pointed out that the AIADMK-PMK alliance had contested seven seats in the 2009 assembly elections and two in the Lok Sabha polls.

The PMK had lost in all the seats they contested.

"I had stated at that time that the PMK would lose all seven seats and the results proved it," he said.

"Now they have been allotted one Rajya Sabha seat. Lets wait and see what is going to happen", he said.

The state congress also slammed the alliance, with TNCC President K S Alagiri saying he did not expect the PMK, which has always prided itself in fighting for the rights of the Most Backward Classes, to forge an alliance with BJP," a party working for the forward communities."

"It is unfortunate that PMK has formed an alliance with AIADMK. It is not acceptable. PMK has committed a historic blunder", he told reporters.

Viduthalai Chiruthaigal Katchi (VCK) leader Thol Thirumavalavan termed the AIADMK-PMK alliance as an "illusion".
Feb 19, 2019 17:05 (IST)
Piyush Goyal also said:
All the parties in alliance in Tamil Nadu will strengthen NDA and our target is 140 seats. All will be won by NDA. We start our campaign, we will sweep Tamil Nadu as a mark of respect to J Jayalalithaa. J Jayalalithaa was a leader. My last interaction with her was in July 2016 and we discussed power sector reforms in Tamil Nadu. She was loving, caring and we had fruitful discussion.
We will work together so that Amma will be happy. We will serve Tamil Nadu people so that we continue the legacy of Amma in the state.
Feb 19, 2019 17:03 (IST)
After AIADMK-PML tie up, BJP announces alliance with AIADMK in Tamil Nadu and Puducherry.
Feb 19, 2019 16:59 (IST)
OPS-EPS presser with Piyush Goyal on BJP-AIADMK alliance:
Piyush Goyal:   I am extremely delighted that AIADMK and BJP has concluded very fruitful discussion to contest elections in Tamil Nadu and Puducherry and by polls to 21 assembly seats in alliance with other friendly partners. The other alliance has been announced in the morning with PMK's Ramadoss. We have agreed to contest elections under leadership of OPS and EPS in Tamil Nadu and at the centre under the visionary leadership of PM Modi.
Feb 19, 2019 15:45 (IST)
The PMK has decided to work hard for the victories of all allies of the AIADMK led coalition in Tamil Nadu and Puducherry, he said.

In the ruling AIADMK, 18 party MLAs were disqualified for anti-party activities. Recently Sports Minister P Balakrishna Reddy lost his membership of the House after being convicted by a court in a case of alleged rioting.

Tiruvarur (M Karunanidhi, DMK) and Tiruparankundram (A K Bose, AIADMK) seats fell vacant following the deaths of the sitting MLAs last year.
Feb 19, 2019 15:45 (IST)
"Though DMK continued to have Ministers in UPA-II during 2009-14, no effort was made to complete such projects or get funding for them. During this period Tamil Nadu faced a setback in the railway sector," Mr Ramadoss said.

"I affirm that PMK will never give up people's welfare and Tamil Nadu''s rights under any circumstances," he said.
Feb 19, 2019 15:45 (IST)
"Anbumani had brough several projects for Tamil Nadu during his tenure, including a speciality hospital, which is on par with AIIMS in Madurai," he said. PMK's Anbumani Ramadoss was the Health Minister and R Velu, the Minister of State for Railways in UPA-I.

Though about Rs 150 crore was allotted for the Madurai project, "construction work was not taken up by the then DMK government and the fund was squandered," he alleged.

On why it decided to not go with the DMK, Ramadoss said that during PMK's stint in the UPA-I regime at the Centre, many projects were implemented for the welfare of Tamil Nadu.
Feb 19, 2019 15:43 (IST)
Pointing to the in-principle nod from AIADMK to implement several projects for the benefit of Tamil Nadu, the PMK leader said factors like giving up at policy level, the petrochemical zone plan, comprising Cuddalore and Nagapattinam districts and convening an all-party meeting on the Cauvery issue weighed in to finalise an alliance with the ruling party.
Feb 19, 2019 15:42 (IST)
Mr Ramadoss said though the decision to align with AIADMK was to a small extent a compromise, he believed it was ''very correct'', since the move would be beneficial to Tamil Nadu.

Explaining the rationale for the alliance, he said though AIADMK was not free of criticism, "the AIADMK government had accepted and implemented several demands and ideas of the PMK," including those on educational reforms.
Feb 19, 2019 15:41 (IST)
PMK founder leader S Ramadoss described the coalition as "an alliance for people''s welfare, a mega coalition and a victorious alliance."

"To retrieve the rights of Tamil Nadu people, we have put forth a 10-point charter of demands," Mr Ramadoss said.
Declaring Cauvery delta districts as a protected farm zone, holding a caste wise census in Tamil Nadu and releasing the seven Rajiv case convicts were among the demands, he said.
"This coalition will be successful in all the 40 constituencies in Tamil Nadu and Puducherry," he said.
Feb 19, 2019 15:40 (IST)
By clinching the deal, AIADMK has stolen a march over the opposition led front, led by arch rival DMK. Seat sharing talks in the opposition front, in which Congress is a key partner, have not concluded yet.

DMK's efforts to rope in PMK into the alliance did not fructify.
Feb 19, 2019 15:40 (IST)
In the 2014 Lok Sabha polls, the PMK, which was part of the BJP-led rainbow alliance of seven parties, contested from eight Lok Sabha seats and won Dharmapuri constituency.

The BJP, which also contested the same number, won from Kanyakumari.
Feb 19, 2019 15:40 (IST)
Under the deal, the PMK would support AIADMK in the bypolls expected to 21 assembly constituencies in Tamil Nadu, Mr Panneerselvam said.

For the AIADMK, the deal with the PMK, which has a significant clout in several northern and western pockets of Tamil Nadu, is seen as a shot in the arm.

The AIADMK is expected to soon formalise a poll deal with the BJP.
Feb 19, 2019 14:46 (IST)
AIADMK leaders Tamil Nadu Chief Minister E Palaniswamy and Deputy Chief Minister O Panneerselvam arrive at Crowne Plaza hotel in Chennai for talks with Union Minister and BJP leader Piyush Goyal.
Feb 19, 2019 14:35 (IST)
PM Modi in Varanasi says: "Our government is progressing the development of the country on two tracks. One track is the infrastructure such as railways, airway, internet, and the second is the attempt to make the lives of farmers, middle class and labour class easy."
Feb 19, 2019 14:08 (IST)
"Many steps have been taken to transform the railways in the last four and half years. Semi-high speed train, Vande Bharat, that was made in India is an example of it. It is sad how this train is being targeted and made fun of by some people," says PM Modi in Varanasi.
Feb 19, 2019 14:03 (IST)
We have succeeded in making Kashi the new energy hub of new India today. A short while ago, I got an opportunity to present a green engine that was first run by a diesel. Now the same engine will be run on electricity: PM Modi.
Feb 19, 2019 12:32 (IST)
Prime Minister Narendra Modi inaugurates Madan Mohan Malviya Cancer Centre of Banaras Hindu University in Varanasi.
Feb 19, 2019 12:24 (IST)
"Identify those who create caste discrimination, promote it for self-interest," PM Modi says at an event in Varanasi.
Feb 19, 2019 12:10 (IST)
PM Modi lays foundation stone and inaugurates various development projects in Varanasi.
Feb 19, 2019 11:53 (IST)
In the AIADMK-PMK alliance, the PMK will get seven Lok Sabha seats and one Rajya Sabha seat. The PMK will support the AIADMK candidates in the ensuing bypolls in Tamil Nadu as well. The list of Lok Sabha seats will be announced later.
Feb 19, 2019 11:47 (IST)
AIADMK leader O Panneerselvam says: "Pattali Makkal Katchi (PMK) joined our alliance today. Seven seats have been allotted to PMK for the upcoming Lok Sabha elections 2019. We will fight on 21 seats in by-elections and the PMK will support us."
"AIADMK will fight on 21 vacant assembly seats in the by-elections and the PMK will support us," he adds, according to news agency ANI.
PMK founder Dr S Ramadoss says: "We have placed 10 conditions, including release of seven convicts in the Rajiv Gandhi assassination case."
Feb 19, 2019 11:38 (IST)
Prime Minister Narendra Modi in Varanasi: "Sant Ravidas is the site of faith and reverence for crores of people. Guruji had conceived of India where everyone would be taken care of without any discrimination. Our government has been doing the work of public welfare while furthering the same sentiment for the past four and a half years."
Feb 19, 2019 11:25 (IST)
PM Modi lays the foundation stone for Guru Ravidas birthplace development project in Varanasi, Uttar Pradesh.
Feb 19, 2019 11:13 (IST)
The Prime Minister is scheduled to spend around six hours in Varanasi, his parliamentary constituency, during which he will launch projects worth Rs 3,300 crore.
Feb 19, 2019 11:07 (IST)
Prime Minister Narendra Modi offers prayers at Ravidas Temple, reports news agency ANI.
Feb 19, 2019 10:13 (IST)
Prime Minister Narendra Modi interacts with Divyangs (persons with disabilities) at Diesel Locomotive Works (DLW) campus in Varanasi
Feb 19, 2019 10:09 (IST)
Prime Minister Narendra Modi flags off first electric engine converted from diesel loco by Diesel Locomotive Works (DLW) in Varanasi, Uttar Pradesh.
Keeping with the Railways' mission of 100 per cent electrification and de-carbonisation, DLW, Varanasi, has converted a diesel locomotive to run on electric traction at almost twice the power.
"Indian Railways has created history by first-ever conversion of a locomotive from diesel to electric traction with almost double the power with indigenous technology under Make in India," a senior Railway Ministry official had said earlier.

Congratulations to our engineers on making world's first Diesel to Electric Locomotive Engine at DLW, Varanasi, UP. The 10K HP locomotive flagged off by PM @narendramodi will boost make in India.