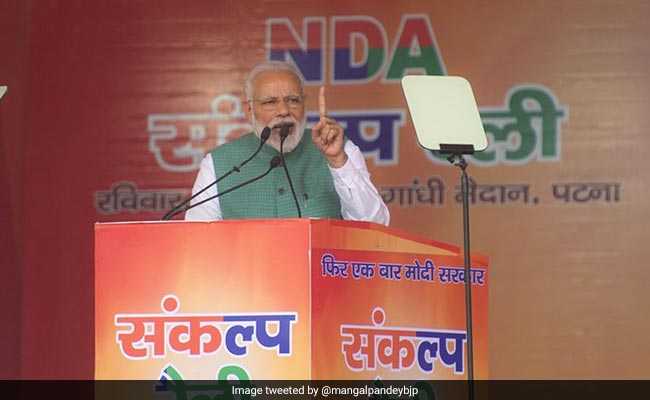 Lok Sabha Elections 2019: A white device is seen on PM Modi's left as he speaks in Patna.

Prime Minister Narendra Modi known to speak extempore at political meetings, was seen using teleprompters on Sunday at the Sankalp rally in Patna. The machines were not visible in the television frame. What drew attention to them was a series of photos tweeted by a state minister from his party. The close-up shots tweeted by Mangal Pandey, the health minister in Nitish Kumar's cabinet, showed the slim, transparent devices on the Prime Minister's left. In a couple of shots, he also appeared to be looking at it.

The sight brought a sharp reaction from opposition leader Lalu Prasad Yadav, who jeered that the Prime Minister is "losing confidence" at the prospect of defeat in Bihar.

Lalu Prasad Yadav, who is currently in jail in several fodder scam cases, tweeted: "Rattled by the failure of his schemes, a man can speak any lie; throw any "jumla". The prospect of defeat in Bihar has shaken PM Modi's confidence to such an extent that he has to look at a teleprompter to give a speech in Hindi."

PM Modi is known to use a teleprompter at public functions, especially where he has to give prepared speeches in English.

BJP sources said that it was a prop to refresh his memory on facts and figures.

Some sources also said while PM Modi had used a teleprompter during January's National Council Meet in Delhi, but he still prefers to use his notes.

Citing facts in speeches that don't appear to tally, has triggered considerable political sparring in the run up to the national elections. On both side of the political divide, leaders have been accused of lies and political gimmick.