"Have To Help Everybody": Hema Malini On Maneka Gandhi Muslim Vote Remark

Union Minister Maneka Gandhi, who is contesting the national elections from Sultanpur, was seen on camera telling a gathering of Muslims to "vote for her". 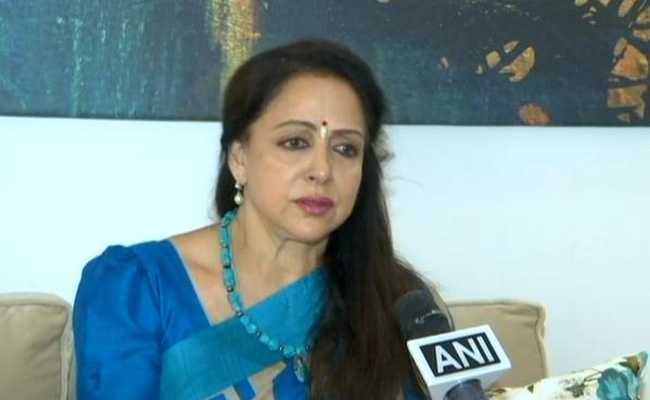 Hema Malini responded to the remarks by her party colleague in an interview to news agency ANI.

Actor-turned-politician Hema Malini, the BJP lawmaker from Mathura, today reacted to party colleague Maneka Gandhi's speech in Uttar Pradesh's Sultanpur and said even if the people in the minority community do not support the BJP, the party leaders still have to help everybody.

Union Minister Maneka Gandhi, who is contesting the national elections from Sultanpur, was seen on camera telling a gathering of Muslims to "vote for her" or else she may not be inclined to be responsive to their requests.

"This is important. I am winning. I am winning because of the love and support of people. But if my victory is without Muslims, I won't feel that good. Dil khatta ho jayega (Things will become sour)," Ms Gandhi, the BJP lawmaker from Pilbhit, said. "Then when a Muslim comes to me for work, I think let it be, how does it matter. It's all give and take, isn't it?" she added. The BJP minister was served a show-cause notice by the District Magistrate of Sultanpur over her remarks on Friday.

Ms Gandhi had later clarified her words had been twisted. "I love Muslims and I had myself called a meeting of the BJP's minority cell. I only meant to say that I am winning the elections and their participation would be like 'daal pe chaunka'."

Hema Malini today responded to Ms Gandhi's speech and said "women in the Muslim community supported the BJP on the triple talaq issue", which has often been a point of contention between the centre and opposition parties. The Modi government, seeking a ban on triple talaq - a practice among Muslim men to instantly divorce their wives by uttering "talaq" or divorce thrice - issued an ordinance on it for the third time in February this year.

In an interview to news agency ANI, Hema Malini also said, "Even if the people in the community do not vote for the party, the leaders still have to help everybody. This kind of feeling doesn't come to me. Everybody is different."

The BJP lawmaker, often criticised for her record as a parliamentarian, had earlier said in her defence that she had visited her constituency over 250 times in five years and had "many roads done, lights put up and shauchalayas (public toilets) built."

The national elections began on April 11 and eight constituencies in western Uttar Pradesh voted in the first phase. The state, that sends maximum lawmakers to the parliament, will also vote on April 18, April 23, April 29, May 6, May 12 and May 19. The results will be announced on May 23.