"Voting is citizens' right, responsibility and a duty. Don't get swayed by what people say. Be a responsible citizen," PIB tweeted with a Devdas collage. 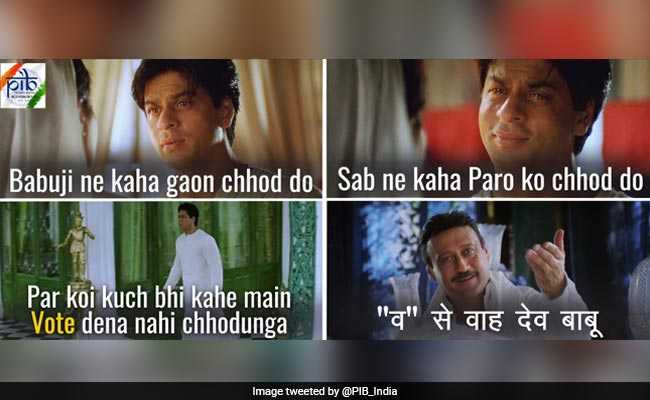 Someone in the Press Information Bureau surely is a big Shah Rukh Khan fan. After parodying a dialogue from SRK's iconic "Dilwale Dulhaniya Le Jayenge" to urge people to vote in the national elections, the government's communication agency pulled out another one today from one of Shah Rukh's classic, "Devdas".

"Voting is citizens' right, responsibility and a duty. Don't get swayed by what people say. Be a responsible citizen, go out and vote, PIB tweeted, along with a collage featuring a parody of Devdas's dialogue, "Babuji ne kaha..."

"Devdas", directed by Sanjay Leela Bhansali, is about man from a wealthy family who becomes an alcoholic after he is stopped from marrying the woman he loves.

Last week, the PIB had in similar fashion tweeted a dialogue from "Dilwale Dulhania Le Jayenge".

Every Election Is Determined By The Voters Who Turn Up

Voting is not just a responsibility, its a duty

Voting for the Lok Sabha elections began on Thursday and will be held over six more phases. Counting of votes will take place on May 23.

On the first day of voting, Prime Minister Narendra Modi and BJP chief Amit Shah were among the first leaders who tweeted to encourage people to vote in large numbers.

"The 2019 Lok Sabha elections commence today. I call upon all those whose constituencies are voting in the first phase today to turn out in record numbers and exercise their franchise. I specially urge young and first-time voters to vote in large numbers," PM Modi had tweeted.