Lok Sabha Polls: The party has fielded Danish Ali, Janata Dal Secular's ex-general secretary, from Amroha. He had quit the JDS last week amid speculations that the party may not field him from the Lok Sabha seat. 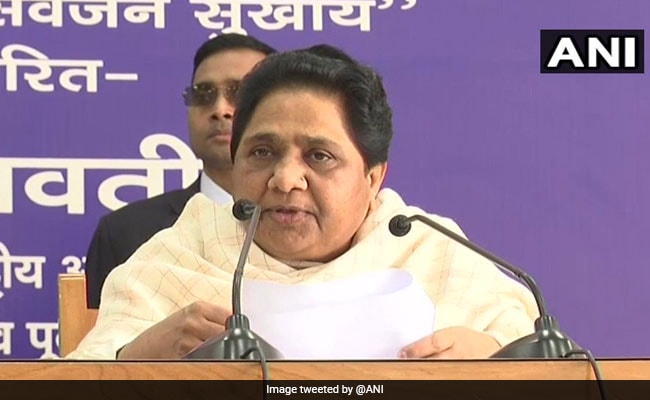 BSP Chief Mayawati on Wednesday said she would not contest the Lok Sabha polls. (File)

The Bahujan Samaj Party (BSP) today released its first list for the national elections announcing names of 11 candidates who will be fighting from Uttar Pradesh.

The party has fielded Danish Ali, Janata Dal Secular's ex-general secretary, from Amroha. He had quit the JDS last week amid speculations that the party may not field him from the Lok Sabha seat.

Mr Ali's exit from the JDS had come as a surprise at a time when he was busy negotiating a deal with the JDS's Karnataka coalition partner, Congress.

Clearing the air on his exit, Karnataka Chief Minister HD Kumaraswamy had called it a "political arrangement".

"Danish Ali, the JDS General Secretary, has joined BSP in consent with me and our national president Sri HD Devegowda in a purely political arrangement between the two parties. It is a thoughtful political decision taken by #JDS and BSP to win more seats in the Loksabha elections," Mr Kumaraswamy had tweeted.

Among other candidates named in the BSP first list are Haji Fazulrahman, who will be fighting from Saharanpur, Malook Nagar -the candidate from Bijnore, Girish Chandra from Nagina, and Haji Mohammad Yakoob from Merrut.

Other important parliamentary seats mentioned in the BSP's first list are Aligarh where Ajit Baliyan has been named as the candidate, Agra where Manoj Kumar Soni will be fighting and Bulandshahr- where Yogesh Varma will be fighting.

Mayawati's party is contesting the general elections in Uttar Pradesh, which sends the maximum number of candidates to Lok Sabha, in alliance with the Samajwadi Party and Rashtriya Lok Dal (RLD).

The BSP is contesting 38 seats in UP, which has 80 parliamentary constituencies, and its ally Samajwadi Party will be contesting in 37 seats.

The BSP chief on Wednesday said she would not contest the Lok Sabha polls because she wanted to "focus on campaigning for the candidates of her party and that of ally Samajwadi Party".

"I won't contest polls. I am confident that my party will completely understand my decision. Our coalition is doing well. I can vacate a seat and contest later if I wish," the former chief minister told reporters in Lucknow.

BSP's first list comes a day after the Bharatiya Janta Party released its first list of 184 candidates. Prime Minister Narendra Modi will again contest from Varanasi, and Smriti Irani will once again take on Congress Chief Rahul Gandhi in Amethi. The BJP has dropped six sitting lawmakers in its first list.

The Akhilesh Yadav-Mayawati alliance left Congress out in UP and the grand old party said it would go alone in the state. However, both the parties said they would not contest on two Congress strongholds- Amethi and Rae Bareily.