Barred From Campaign, Mayawati's Nephew, Azam Khan's Son Fill In For Them

The Election Commission had Monday barred the two leaders - as well as UP Chief Minister Yogi Adityanath and BJP's Maneka Gandhi - from campaigning for varying periods over violations of the moral code of conduct. 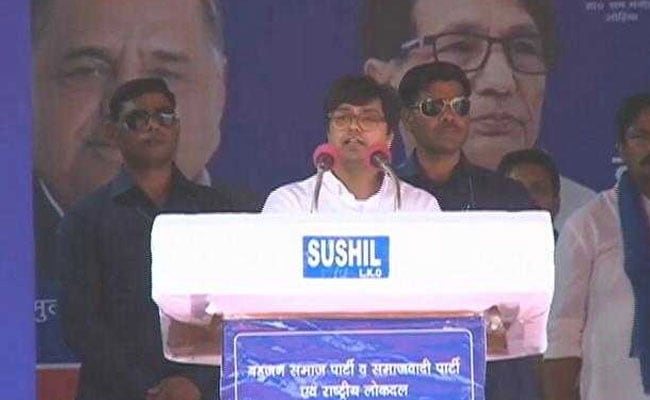 BSP chief Mayawati's nephew and SP leader Azam Khan's son on Tuesday filled in for the two Uttar Pradesh heavyweights on Tuesday, the final day of electioneering for the second phase of polling in the state.

The Election Commission had Monday barred the two leaders - as well as UP Chief Minister Yogi Adityanath and BJP's Maneka Gandhi - from campaigning for varying periods over violations of the moral code of conduct.

The leaders stayed away from the campaign, but marked their presence in other ways.

Yogi Adityanath prayed at a Hanuman temple in Lucknow, a day after the Election Commission issued the order frowning at his ''Ali-Bajrang Bali" remark, seemingly framing the election as a contest between Hindus and Muslims.

Campaigning for the second phase of Lok Sabha elections in Uttar Pradesh ended on Tuesday evening.

Yogi Adityanath followed the EC order, keeping away from the meetings he was scheduled to address in second-phase constituencies of Nagina and Fatehpur Sikri.

He also skipped Union Home Minister Rajnath Singh's road show, held before he filed his nomination as the BJP candidate from Lucknow.

Instead, Yogi Adityanath prayed at the well-known Hanuman Setu temple in the state capital, refusing to interact with other worshippers.

Mayawati skipped the joint opposition alliance rally in Agra, which too goes to the polls on April 18.

"People in such large numbers have come here on the appeal of my aunt, for which I am thankful," he said.

He said the victory of the alliance candidates will be a "proper reply" to the Election Commission, ending his brief address with the ''Jai Bhim, Jai Bharat" slogan.

Akash Anand is the son of Mayawati's brother Anand Kumar and had begun appearing in public with her, but not as a speaker.

While Azam Khan didn't campaign on Tuesday following the EC reprimand, his son Abdullah courted controversy by claiming that the leader was targeted because he is a Muslim.

The EC had ordered Azam Khan to suspend his campaign over a "khakhi underwear" jibe at BJP candidate Jaya Prada.

"No action was taken when the BJP candidate stated on Twitter that she is coming to Rampur to bring an end to the regime of a demon," Mr Abdullah told reporters in his father's constituency.

He maintained there was no mention of her in his father's speech and he has been barred "only because he is a Muslim".

Mr Abdullah termed the gag order an attempt by the EC to please the Bharatiya Janata Party after the poll panel banned Yogi Adityanath from campaigning.

The EC had taken objection to Yogi Adityanath's remark suggesting that while the BSP and the SP had faith in Ali, the BJP believed in Bajrang Bali, or Lord Hanuman.

This was in rejoinder to Mayawati's appeal for Muslim votes at an earlier rally in Deoband, which got her banned for 48 hours.

Yogi Adityanath, barred from campaigning for 72 hours, had also called the Indian Union Muslim League in Kerala a "green virus".

Among the candidates in the fray in UP in the second phase are two actors-turned-politicians -- BJP's Hema Malini is contesting from Mathura and UP Congress chief Raj Babbar has been fielded in Fatehpur Sikri.

UP cabinet minister SP Baghel (BJP) is contesting for the Agra (SC) seat.

Kunwar Danish Ali, who till recently was general secretary of the Janata Dal-Secular, is contesting on the BSP ticket from Amroha against BJP's Kanwar Singh Tanwar.

According to the Election Commission, 1,40,76,635 people are registered to vote at 16,162 booths in 8,751 polling centres spread across these constituencies.