"Will Reply To Pak's Bullets With Bombs," Says Amit Shah At Bengal Rally

Lok Sabha Elections 2019: "Mamata Banerjee has recently become very angry with us (the BJP government). I was wondering what the matter was," said Amit Shah. 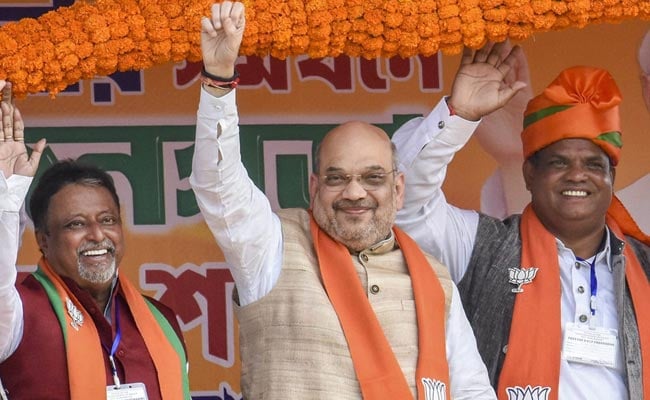 "Shouldn't the terrorists and Pakistan be given a befitting reply?" Amit Shah asked (PTI)

"Mamata has recently become very angry with us (the BJP government). I was wondering what the matter was. Later the journalists told me, she is annoyed because Modiji entered Pakistan and conducted air strikes on terrorists," Mr Shah told a rally in West Bengal.

He alleged that for people like Ms Banerjee and certain opposition leaders who were questioning the air strikes, the country's security was less important than securing their vote banks.

"Mamata (Banerjee), Rahul Baba (Gandhi), Akhilesh Yadav are all talking about holding a dialogue (with Pakistan). She is trying to appease her vote bank. The terrorists from Pakistan attacked and killed 40 of our brave jawans. Should they be punished or not? Shouldn't the terrorists and Pakistan be given a befitting reply?" he asked.

It is India's right to defend itself. And I can assure you that the Modi government will not spare the terrorists. We will reply to Pakistan's bullets with bombs," he said.

Mr Shah also flayed Ms Banerjee for questioning the timing of 'Mission Shakti' announcement and said the "missile" of Bengal's voters will wipe her out of the state.

"Recently, India's missile destroyed a live satellite in space. With this India became the fourth country in the world to do this. Are you people happy or not? But Mamata is saying it should have been done later."

Mr Shah alleged that the people of West Bengal were not getting the benefit of PM Modi's Ayushman Bharat health scheme under which close to 50 crore Indians were getting free treatment worth Rs 5 lakh.

"Unfortunately, you will not be able to avail the benefits because Mamata Didi is preventing it from reaching you all. Unless you oust Mamata from power, none of you would be able to get the benefits of Ayushman Bharat," he added.

The BJP chief accused the ruling Trinamool Congress (TMC) of running syndicates involved in smuggling of cows and collection of illegal toll tax.

Mr Shah said the 2019 elections were very important for the security of India. "For Bengal, it is an election to protect its identity and democratic framework.

"Uproot this Trinamool Congress government and establish a government of the lotus. Remember, it is a symbol of Goddess Saraswati and Laxmi. It is a sign of prosperity," he told the crowd.