In 2019 General Elections, 21 Million Women Will Not Be Able To Vote

Lok Sabha elections 2019: The problem is worst in Uttar Pradesh where 6.8 million women are missing from voters' lists.

The 2019 Lok Sabha election is set to create a new record. For the first time in India's history, voter turnout among women is expected to be higher than that of men. A closer look at their numbers, however, provides a disquieting insight.

A large number of women, equal to the population of Sri Lanka, appear to be "missing" from the country's lists of voters.

Based on the 2011 census, India should have 451 million women over the age of 18 in 2019. However, the number of women on the electoral rolls is 430 million. The gap: 21 million. That equals to every single woman in a state with as many people as in Haryana or Kerala not being allowed to vote. In effective numbers, it means the exclusion of some 30,000 women from each Lok Sabha constituency. In Uttar Pradesh, the problem is at its worst. In the giant state that is most important in deciding which party wins the elections, as many as 85,000 women per constituency are missing from voters' lists. On average, this amounts to 8 per cent of the total vote - a sizeable margin in most electoral races in India.

Experts say it could be due to social and cultural conservatism. In South India, where literacy and human development indices are higher than that in the north, the problem is not as big. 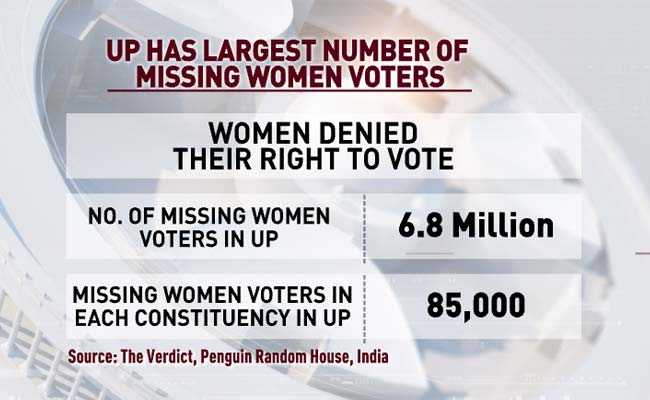 The ruling out of a partisan plot is backed by numbers. In 2014, when the Congress-led coalition was in power, the gap was even higher at 25 million.

But for a party like the BJP, which counts greater support among men than women, the gap is an advantage, experts say.

Election Commission sources say they are doing their best to reduce the gap.

Voting for the Lok Sabha elections will be held in seven phases starting April 11. Results will be declared on May 23.