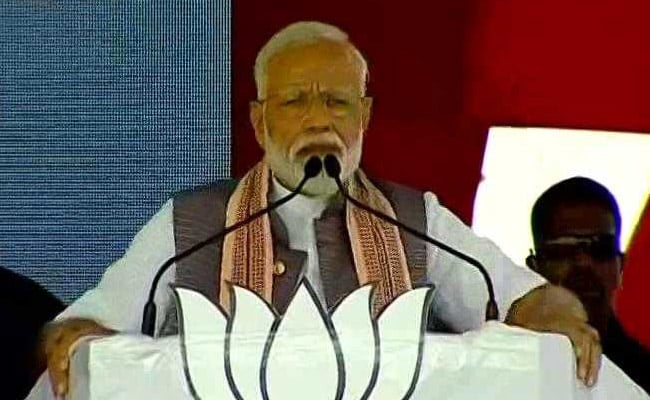 Hitting out at Congress, Prime Minister Narendra Modi, in an election rally in Maharashtra said, those sitting in Delhi in AC rooms and keeping a tab on things which will happen after who hugs whom, after who shakes hands with whom, after who looks at whom, they don't know the ground reality.

Meanwhile, Congress President Rahul Gandhi offered prayers and performed rituals for his late family members as well as victims of the Pulwama terror attack at Thirunelli temple today. Mr Gandhi, who is contesting the ensuing polls from Wayanad parliamentary constituency, was accompanied by Congress General Secretary KC Venugopal, among others. The Congress president is scheduled to address rallies in Kerala's Alappuzha and Thiruvananthapuram later in the day.

Polling in Kerala will be held in a single phase on April 23. Counting of votes will take place on May 23.

Track all the Highlights of the Lok Sabha elections 2019:

Read Here: Lok Sabha Elections 2019: Ashok Gehlot's Caste Comment on President Ram Nath Kovind Draws BJP Wrath
The Congress today landed in a huge controversy after its senior leader Ashok Gehlot said Ram Nath Kovind was made the President of India because of caste considerations. The BJP called the comment "anti-Dalit, anti-poor and anti-constitutional" and demanded an apology and strong action.
Apr 17, 2019 14:47 (IST)
BJP president Amit Shah hits out at Chief Minister Mamata Banerjee and tweeted, "Finally, Mamata didi's trusted lieutenant accepts that her party believes in the idea of violence and anarchy. But I want to remind Mamata Didi that such destruction of democracy won't last long. People of Bengal will vote out TMC at the hustings. Her time is up!"
Apr 17, 2019 14:45 (IST)
A Chhattisgarh minister is on camera telling voters they will feel an "electric shock" if they press any button other than that for the Congress candidate on the Electronic Voting Machine (EVM). The minister, Kawasi Lakhma, has been issued a notice by the Election Commission. The five-time lawmaker is Chhattisgarh's excise, commerce and industries minister.
Apr 17, 2019 14:38 (IST)
BJP people are also saying they will win 50 out of 42 seats as they don't even know how many seats are there. Let them dream, people of Bengal are with Mamata Banerjee and TMC. May 23 we'll see where these people hide, said Trinamool Leader Derek O'Brien.
Apr 17, 2019 14:30 (IST)
READ| Election 2019: Sadhvi Pragya, Malegaon Blast Accused, Joins BJP, Says Will Contest Polls NCP Chief Sharad Pawar: How will he (PM Modi) know how to run a family? That's why he peeps in others' homes. I can say more also but I don't want to stoop to low-level https://t.co/j5mtDMyrfq

Union Min P Goyal: Rahul Gandhi is afraid of defeat in Amethi&has to run all the way to Wayanad...he has lost the confidence of people of India. I am sure the people of Kerala will defeat him so that in next election he will have to look for a constituency in some other country. pic.twitter.com/cV8NmXyImR

Apr 17, 2019 12:56 (IST)
The UPA government gave only 1 lakh 15 thousand crore rupees for the development of Maharashtra under the 13th Finance Commission. When you made PM Modi, four lakh 38 thousand 760 crore rupees were given under the 14th Finance Commission for the development of Maharashtra.
For ten years, the UPA government was in the country, for its vote bank, they had also put the security of the country on the lookout. In the country, the terrorists came and cut the heads of the Jawans, but the government did not do anything like that. In the first world, there were two countries that retaliated the blood of their jawans, one in the United States and the other Israel.  The Narendra Modi government has decided to register the third name in the list of these countries, says Amit Shah.
Apr 17, 2019 12:55 (IST)
BJP President Amit Shah Addressing A Rally In Sangli, Maharashtra
East, west, north, south I visited the country everywhere, Modi-Modi was heard everywhere. It is the public's resolve that ' once again the Modi government ': Shri Amit Shah. Rahul Baba remembers the poor today, Sharad Pawar ruled so many years, five to five generations, the Gandhi family ruled the country but they did nothing for the poor. Maharashtra has been developed by the BJP government.  Maharashtra was lagging behind in every sector under the Congress-NCP regime. The BJP and Shiv Sena government have again worked to revive Maharashtra.
Apr 17, 2019 12:38 (IST)
I am very happy.... Together we will work to defeat forces working against the interest of the country. We will defeat those who conspire against India, says Sadhvi Pragya Singh.

Sadhvi Pragya Singh Thakur in Bhopal: I have formally joined BJP, I will contest elections and will win also. #LokSabhaElections2019pic.twitter.com/siAsXSMm1U

Apr 17, 2019 12:26 (IST)
Bihar Deputy Chief Minister Sushil Modi: When CBI went to Supreme Court, Lalu Prasad Yadav sent his messenger Prem Gupta to Arun Jaitley, asking to not let CBI appeal to the SC in the case. He said that if they get help '24 ghante mein Nitish Kumar ka ilaaj kar dunga'. Later Mr Yadav and Prem Gupta, both met Arun Jaitley and offered to topple Nitish Kumar government. Arun Jaitley clearly said that we can't interfere in CBI's functioning as it is an autonomous institution. When Jharkhand High Court gave the verdict in favour of Lalu Yadav that there is no need for a trial in other cases related to fodder scam, CBI went to Supreme Court challenging this decision.
Apr 17, 2019 12:19 (IST)

Congress Pres Rahul Gandhi in Wayanad, Kerala: I'm not like PM of India, I'll not come here & lie to you because I respect your intelligence, wisdom & understanding. I don't want to have a relationship of couple of months with you, I want to have a life long relationship with you pic.twitter.com/lZRB5XjD0Z

Apr 17, 2019 12:08 (IST)
Congress President Rahul Gandhi in Wayanad, Kerala: I've not come here as a politician who is going to tell you what to do or what I think. I'm not here to tell you my 'Mann ki baat', I'm here to understand what is inside your heart, your soul.
Apr 17, 2019 11:59 (IST)
Congress president Rahul Gandhi addresses public meeting in Wayanad, Kerala. For the last five years, we are fighting the ideology of Prime Minister Narendra Modi and RSS. And the thinking of their ideology is of one person should only rule, Mr Gandhi said.
Apr 17, 2019 11:43 (IST)
PM in Solapur, Maharashtra: Those sitting in Delhi in AC rooms and  keeping a tab on things which will happen after who hugs whom, after who shakes hands with whom, after who looks at whom, they don't know the ground reality. Now I know why Sharad Rao ran away from the battleground.
Apr 17, 2019 11:27 (IST)
Congress General Secretary KC Venugopal on Rahul Gandhi's temple visit in Wayanad said, "Last time also he had wished to come here but because of security restrictions, he could not do it. Here is the place where the ashes of Rajiv Gandhi were immersed, in Papanasini river."
Apr 17, 2019 11:22 (IST)
PM Modi To Address A Rally In Maharashtra
Prime Minister Narendra Modi to address a rally in Akluj in Madha Lok Sabha constituency of Solapur district. PM Modi who will hold five rallies in Gujarat today and tomorrow will address rallies in Himatnagar, Surendranagar and Anand today. On April 18, he is scheduled to visit Amreli and Patna on April 21.
Apr 17, 2019 11:21 (IST)
Nirmala Sitharaman "Didn't Inform Anybody" About Visiting Shashi Tharoor 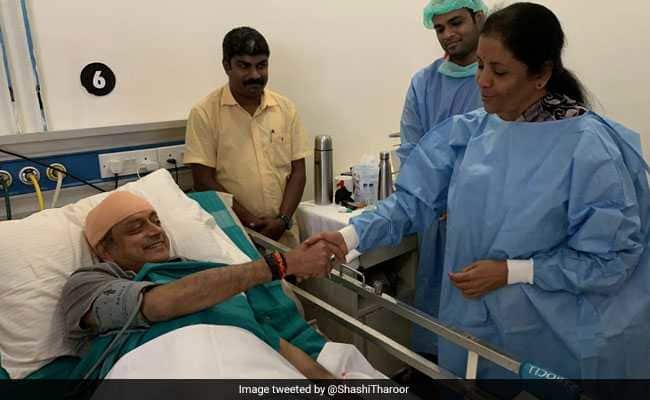