Clashes broke out after news of Giriraj Singh's victory emerged, and BJP supporters allegedly burst crackers near the CPI office in Begusarai. 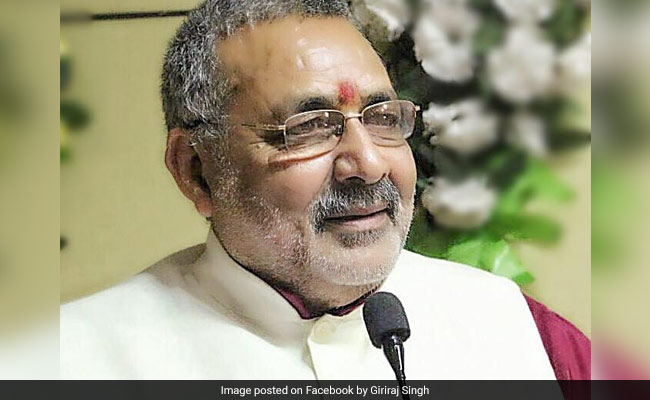 Giriraj Singh was initially miffed about being moved from Nawada to Begusarai.

Union Minister Giriraj Singh retained the Begusarai seat for the BJP by defeating his nearest rival -- CPI candidate Kanhaiya Kumar -- by a margin of over four lakh votes, results of the Lok Sabha elections showed on Thursday.

Giriraj Singh, who had moved from Nawada to Begusarai with some reluctance, polled 6.92 lakh votes of the total 12.17 lakh polled as part of the fourth phase of the elections on April 29. By comparison, Kanhaiya Kumar -- who made news after being booked in a sedition case as the president of the Jawaharlal Nehru University in New Delhi -- got just 2.7 lakh votes. The margin of difference between the two candidates turned out to be a whopping 4.22 lakh votes.

Rashtriya Janata Dal candidate Mohammad Tanweer Hassan came a distant third with 1.98 lakh votes. According to news agency PTI, over 20,000 voters from Begusarai opted for NOTA in this election.

Although the RJD had previously considered fielding Kanhaiya from the parliamentary constituency as part of an alliance with the CPI, it later backed out on the notion that propping a candidate from the Bhumihar caste would anger its support base of Yadavs and Muslims. The decision did not go down well with the CPI, which then stopped short of tying up with the RJD. The CPI believed that Kanhaiya Kumar would be successful because the district has a strong legacy of the Left movement.

According to news agency IANS, clashes broke out between BJP and CPI supporters soon after news of Giriraj Singh's victory emerged. The violence was sparked off after upbeat BJP supporters allegedly burst firecrackers near the CPI office in Begusarai on Thursday evening. According to police, the two groups threw stones at each other.

Additional security forces have been deployed in the area.

BJP candidate Bhola Singh had won Begusarai by polling 4.28 lakh votes in the 2014 Lok Sabha elections. Mohammad Tanweer had lost by a relatively slim margin of 55,000 votes back then.