Rahul Gandhi remained firm on his decision to quit as the Congress president following the party's decimation in the national election, even though his offer was unanimously rejected at a meeting of the party's top leaders on Saturday. The leader, who has been much criticised by the BJP over "dynastic politics", also had tough words for party leaders, who he said, "pushed" for their sons' candidature, sources said.

Rahul Gandhi had spoken up during a four-hour post-mortem when his trusted adviser Jyotiraditya Scindia spoke about the need to build and strengthen the local leadership in the party. Though Mr Gandhi did not name anyone, several leaders had their sons and daughters fielded this time, strengthening the voters' perception about the Congress being a dynastic party.

By and large, the Gen-Next candidates of the Congress lost. 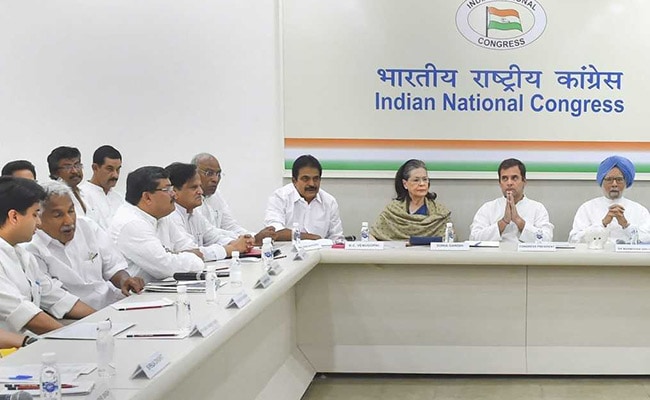 Rahul Gandhi took "100 per cent" responsibility for the party's failure and told the Congress Working Committee that he would like to exit as its top boss. (PTI)

In December, the Congress won three major heartland states, Rajasthan, Chhattisgarh and Madhya Pradesh, but the party could not hold the momentum and translate those into gains in Lok Sabha. The infamous Congress complacency and infighting consumed those gains within five months. The party also failed the test in Karnataka, another state it rules in alliance with HD Kumarasamy. Only in Punjab, which it is ruling since 2017, it had won eight of 13 seats. But that too, came in the backdrop of a feud between Navjot Sidhu and his boss, Chief Minister Amarinder Singh.

On Saturday, Rahul Gandhi took "100 per cent" responsibility for the party's failure and told the Congress Working Committee -- which comprises 52 members -- that he would like to exit as its top boss. He had taken charge of the party in December 2017 from his mother Sonia Gandhi.

But the shell-shocked Congress had stuck to the template, refusing to let Rahul Gandhi step down. Party leaders even praised him and authorized him to go for a complete overhaul of the party.

The Congress has always had the Gandhis at the helm, except for several years after former Prime Minister Rajiv Gandhi was assassinated in 1991. But the party did not do well under Sitaram Kesri and several leaders had convinced Sonia Gandhi to enter active politics and take the reins of the party.

This time, P Chidambaram turned emotional while asking Rahul Gandhi to continue and said some supporters, especially from the south, which voted for the Congress, may take some "extreme step" in case he resigned, sources said.