Election Results: The margin is already higher than the previous record of 4.83 lakh, set in the 2014 general elections by BJP patriarch LK Advani. 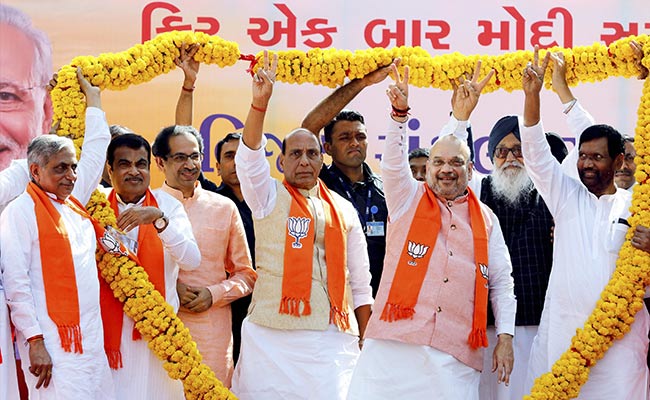 BJP chief Amit Shah is set to make his Lok Sabha debut from Gandhinagar in Gujarat with a record margin of over five lakh votes. Amit Shah has pulled 8.75 lakh votes; the Congress's CJ Chavda is second at 3.31 lakh, making the gap between the two to be 5.44 lakh.

The margin is already higher than the previous record of 4.83 lakh, set in the 2014 general elections by BJP patriarch LK Advani, who Mr Shah replaced as candidate from one of Gujarat's most prestigious seats.

Amit Shah contesting Gandhinagar is seen as the end of the road for Mr Advani, 91, who held the seat for six terms. Mr Advani, who was Deputy Prime Minister in the BJP government that Atal Bihari Vajpayee led nearly two decades ago, was hurt at the way he was pink-slipped.

Sources had said more than the idea that he would not be in parliament for the first time in decades, Mr Advani was hurt that the emissary of the news was not BJP president Amit Shah but a lower functionary.

However, Mr Advani, in a statement today, congratulated PM Modi and also credited Amit Shah for an "enormous effort" in taking the BJP's message to voters.

"Amitbhai Shah as the BJP president and all the dedicated workers of the party have put in enormous effort in making sure that the message of the BJP reaches every voter of the country," Mr Advani said.

Amit Shah, the architect of the BJP's huge mandate in the 2014 national elections, was made a member of the Rajya Sabha in August 2017 and was given the seat occupied by Venkaiah Naidu after he was made the Vice-President.

His nomination for Lok Sabha turned into a massive show of strength by the National Democratic Alliance or NDA. A number of top leaders shared stage with Mr Shah at a public meeting in Gandhinagar and then held a road show through the city.

The BJP has done phenomenally well in Gujarat in the national election, pulling off a clean sweep for a second time in a row. Leads suggest the party will win 26 out of 26 seats in the state.

The BJP is headed for a bigger victory than it did five years ago, with the BJP set to win nearly 300 seats on their own this time. In 2014, the BJP had won 282 seats.