The jawan, who had posted videos on social media complaining about the food served to troops on the frontlines, was dismissed from service in April 2017. 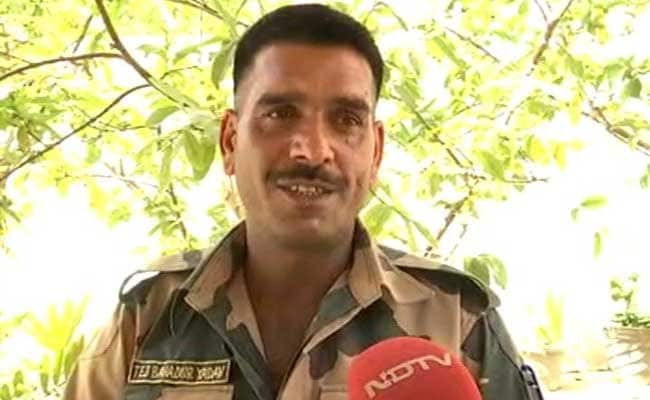 Dismissed soldier Tej Bahadur Yadav, who has been fielded by the Samajwadi Party from Varanasi against Prime Minister Narendra Modi, has been sent a notice by the Election Commission. The Border Security Force man had been dismissed for his public allegations about the quality of food served.

In its letter, the Commission on Tuesday said employees of the state or central government who have been dismissed for "corruption or disloyalty to the state" shall be disqualified from campaigning for a period of five years.

Tej Bahadur Yadav has been asked to clarify his status by May 1.

When he had filed his nomination, he had accepted that he was dismissed.

But when he filed his papers again, he had omitted it, causing a discrepancy. On the basis of his reply, his nomination would be accepted or rejected.

The jawan, who had posted videos on social media complaining about the food served to troops on the frontlines, was dismissed from service in April 2017.

After Home Minister Rajnath Singh ordered an inquiry and the Prime Minister's Office sought a report, a court martial inquiry found him guilty of making false charges. Contending that he was victimised because he spoke the truth, Mr Yadav said he would go to court for justice.

In a massive exercise in optics, Tej Bahadur Yadav was fielded against PM Modi yesterday by the Samajwadi Party. The jawan claimed that even Arvind Kejriwal's Aam Aadmi Party had promised to back him. In 2014, Mr Kejriwal had contested against PM Modi and got more than 2 lakh votes.

On Tuesday, in a dig at the BJP,  Lalu Yadav's Rashtriya Janata Dal tweeted, "Vote for the soldiers directly - in Varanasi... If your patriotism is not hollow"

Various BJP leaders, including Prime Minister Narendra Modi, have accused the opposition of neglecting the requirements of the armed forces and highlight the government's efforts in this regard to underscore its commitment to nationalism and national security, its central theme in this election.