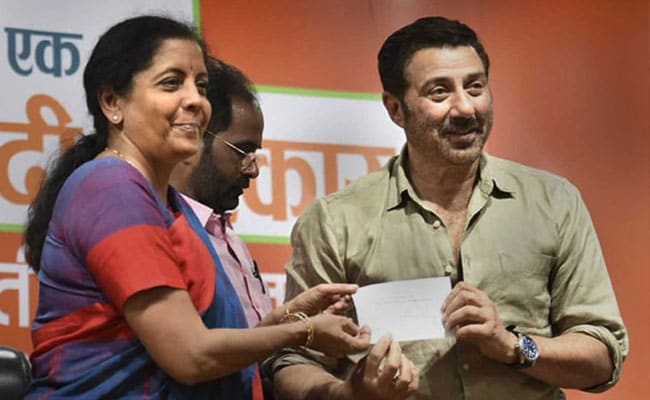 Punjab Chief Minister Amarinder Singh on Friday took a sharp jibe at actor-turned-politician Sunny Deol who is contesting the Lok Sabha election in Gurdaspur on BJP ticket, saying he was only a filmy fauji or a soldier only in the movies. He was referring to the character of 1971 war hero Brigadier Kuldip Singh Chandpuri played by Sunny Deol in 1997 film 'Border'.

Mr Singh, who himself served in the Army, was campaigning for the Congress candidate in Gurdaspur, Sunil Jakhar. He claimed Mr Deol had no ground support in the constituency.

"He (Sunny Deol) is a filmy fauji, while I am a real fauji," Mr Singh was quoted by news agency IANS.

"We will defeat him, he is no threat to Sunil (Jakhar) or the Congress," he added.

Describing Sunny Deol as an "ageing actor whose acting career was over", Amarinder Singh said "he will come and go".

"Sunny might have played 23 Punjab's (Regiment's) Brigadier Kuldip Singh Chandpuri in (movie) "Border", but that does not make him a real soldier, he added.

The film had also found mention in the BJP press conference earlier this week. Welcoming Mr Deol into the party, Union Minister Nirmala Sitharaman had said, "The moment we got to know that he is coming to the party, I can only relate to the film Border he had made, post which the impact on the Indian audience of such a theme was really proven.... "The feeling of nationalism and patriotism, when so beautifully evoked through a film, can really touch the core of Indian citizen."

The Gurdaspur seat had been held by Vinod Khanna, a Bollywood star of the 70s, until he died in 2017.

In the 2017 bypoll after Mr Khanna's death, there were speculation of his wife Kavita Khanna's nomination from the seat. However, businessman Swaran Salaria had been chosen over her. Mr Salaria was dealt a massive defeat by Congress's Sunil Jakhar, who won by a margin of close to 2 lakh votes.

Sunny Deol, 62, debuted in films with the movie "Betaab" in 1983. Over the years, he excelled in action hero roles in films like "Ghayal", "Gadar: Ek Prem Katha", "Damini".