Sunny Deol, visibly concerned for the woman's safety, saw to it that his supporter got off the truck without an incident. 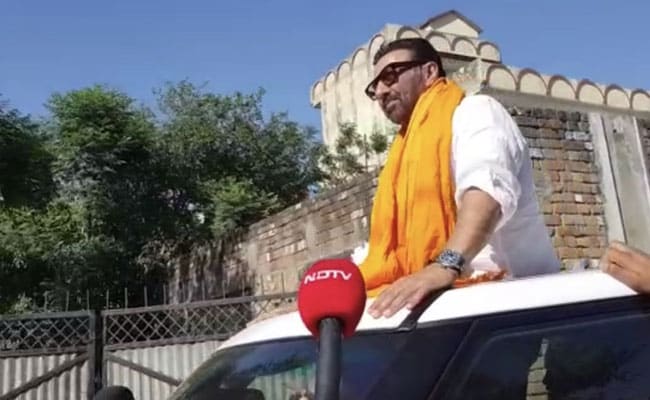 Sunny Deol, the BJP's star candidate in Punjab's Gurdaspur, on Thursday received a pleasant surprise during a roadshow in the constituency. The actor, known for his on-screen machismo, was canvassing from a packed truck when a woman climbed on the vehicle and gave him a peck on the cheek.

The actor, visibly concerned for the woman's safety, saw to it that his supporter got off the truck without an incident.

The whole incident was caught on the camera and has been widely shared on social media.

The Gurdaspur seat was held by another BJP star Vinod Khanna. After his death, Congress's Sunil Jakhar won the bypolls in 2017. In 2019, the BJP fielded Mr Deol, a debutante, to exploit his mass appeal as an actor.

#WATCH: Actor-turned-politician Sunny Deol who is the BJP candidate from Gurdaspur Lok Sabha seat was kissed on his cheek by a woman during his roadshow in Batala, Punjab yesterday. pic.twitter.com/YTQvNDzRYL

He is the second generation of Deols to have entered politics. His father Dharmendra had won the Lok Sabha polls from Rajasthan's Bikaner on the BJP's ticket in 2004.

Mr Deol, 62, who began his Bollywood career in 1983 with "Betaab", he is widely known for 1997 blockbuster "Border", in which he played war hero Major Kuldeep Singh Chandpuri.

He recently said he didn't know about issues like the Balakot strikes and the country's relations with Pakistan.

"I do not know much about issues like Balakot strikes or India's relations with Pakistan. I am here to serve people; if I win maybe I will have an opinion, right now I don't," he had said.

His comment prompted an attack from Punjab Chief Minister Captain Amarinder Singh, who called him a "showpiece".

"While (Prime Minister Narendra) Modi has been taking credit for Balakot, this man (Sunny Deol) does not even know what had happened there," he said.