"Wanted To Give PM Modi A Tight Slap Of Democracy," Says Mamata Banerjee 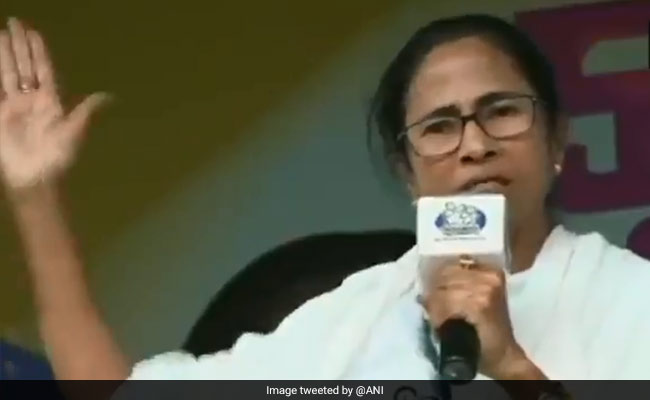 This fresh outburst was prompted by PM Modi's equally unsparing attack on Ms Banerjee about what he called Bengal's "Triple T " -- Trinamool, Tolabaazi, Tax". "Tolabaazi" is a near-abusive term used in Bengali to describe organised extortion.

"Money does not matter to me. That is why when Narendra Modi came to Bengal and accused my party of being tolabaaz, I wanted to give him a tight slap of democracy," Ms Banerjee said.

She continued her attack on Mr Modi saying, "He is such a liar, he is setting a bad example for the country's children."

Ms Banerjee also reacted to PM Modi's allegation that some people had been arrested for chanting "Jai Shri Ram".

"I will not join them (the BJP) in shouting their slogan. I will rather say Jai Hind," she was quoted by news agency PTI.

She was attacked by Mr Amit Shah too on Tuesday for her action against people shouting 'Jai Shri Ram'.

On Sunday, a video showing Mamata Banerjee fuming at villagers for chanting the slogan as her car drove past had gone viral. The incident took place at Chandrakona town in West Midnapore district.

PM Modi had said Mamata Banerjee - referring to her repeatedly as 'speed breaker didi' - was going after those chanting 'Jai Shri Ram' out of frustration.

With two rounds of polling remaining in the ongoing Lok Sabha polls, bitter words are being exchanged between prominent political leaders. PM Modi's recent comment that Congress President Rahul Gandhi's father Rajiv Gandhi died as "corrupt number 1", was slammed by the opposition. While Mr Gandhi's responded with "hugs" and "love", Ms Banerjee went for an all-out onslaught on Monday.

"People who lay down their lives for the country, they should be respected. Yesterday, you called Rajiv Gandhi corrupted Prime Minister. Today you are calling me 'tolabaaz'. If I am a tolabaaz, what are you? What are you? Your entire body - from head to feet - is drenched in the blood of people. Only riots, only riots and only riots," Ms Banerjee on Monday thundered at a rally in Bishnupur, 130 km from Kolkata.

Mamata Banerjee's party, the Trinamool Congress, had won 34 out of 42 Lok Sabha seats in West Bengal in 2014. Her party could play an important role in deciding who comes power at the centre when the results for the ongoing national elections are declared.

"...We do not want Modi to stay in power. We will help in government formation in Delhi," she said at another rally in West Bengal.