In UP Mahagathbandhan, A Star Negotiator And Mayawati's Veto On Congress

Sources say that the decision to keep the Congress out of the alliance was primarily Mayawati's.

As the alliance between Uttar Pradesh rivals Samajwadi Party and Bahujan Samaj Party (BSP) gets to work for the national election ahead, the role of a new negotiator has emerged. If Mayawati's key aide SC Mishra handled the negotiations for the BSP, Rajya Sabha member Sanjay Seth was the pointsperson for Akhilesh Yadav.

Sanjay Seth, 57, is a first-time parliamentarian elected to the upper house in 2016. Why Akhilesh Yadav chose him as his representative could be because the businessman is familiar with Behenji (as Mayawati is popularly called) and so, is someone trusted on both sides. Mr Seth, along with Satish Mishra, carried messages between the two leaders and were also responsible for organising their meetings.

"It is wrong to say that I played a key role. We were like secretaries, carrying out what was asked of us,'' said Mr Seth to NDTV. However, his role can't be underestimated. After all, alliance talks in Madhya Pradesh failed because Mayawati said she was unhappy, not with the Congress leadership, but with the local leaders.

Sources told NDTV that the decision to keep the Congress out of the alliance was primarily Mayawati's. "She is very upset about what happened in Madhya Pradesh and Rajasthan,'' said a source, and this was conveyed to the Samajwadi Party leadership early in the talks.

However, Mr Seth said it was a joint decision. 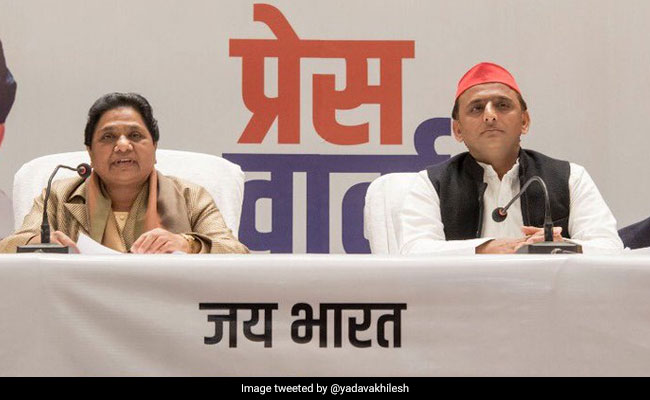 Mayawati and Akhilesh Yadav addressed a press conference on Saturday.

The idea of a tie-up crystallised last year when the two rivals saw their combined chemistry working in the Gorakhpur and Phulpur bypolls in Uttar Pradesh. The foundation for the alliance was sealed soon after the results in Kairana, where the Rashtriya Lok Dal (RLD)'s Muslim woman candidate was backed by all and ended up winning the election. Party insiders also calculated that the Congress' voters don't usually transfer their votes to the SP or the BSP and so they were better off without the party.

The Congress sees an opportunity in the snub. "If we would have gone with them, the future of our party and cadres would have been destroyed. Here we have a chance of winning more seats,'' said a party leader.

There has been speculation that Mr Seth's entry means the sidelining of the other Akhilesh Yadav ambassador in Delhi - his uncle Professor Ramgopal Yadav. This was dismissed by Samajwadi insiders. They point out that Professor Yadav was present in Delhi when the key alliance was sealed during Akhilesh Yadav and Mayawati's meeting on the first weekend of the year.

His presence in Lucknow during the announcement on Saturday was considered "unnecessary" as the stage only had space for the big two, said sources.