The poll body decision's has triggered yet another round of war of words, with the Trinamool Congress alleging that the move was "arbitrary and motivated". 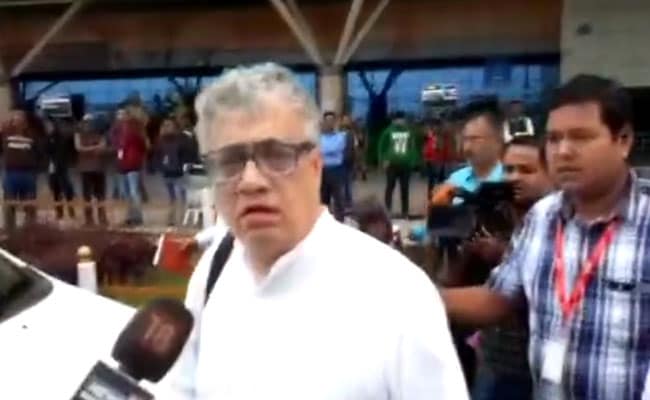 Derek O'Brien shot off a letter to the Election Commission (File)

The Election Commission on Tuesday barred Cooch Behar police chief from election duties, two days before the constituency goes to poll. The poll body's decision has triggered another round of war of words, with the Trinamool Congress alleging that the move was "arbitrary, motivated and biased". In a letter to the commission, senior party leader Derek O'Brien has also alleged that BJP's Mukul Roy had threatened the officer during Prime Minister Narendra Modi's recent Bengal rally.

"The Commission has decided to transfer Abhishek Gupta from the post of SP, Cooch Behar, and to post Amit Kumar Singh, SS, IB, as SP Cooch Behar in his place," the Election Commission said in a letter to Bengal's Chief Secretary, adding the officer shall not be given any election related duty.

In response, Mr O'Brien alleged in the letter that Mr Roy had hinted that the officer would be "robbed off his uniform".

"The decision taken by the EC to transfer Superintendent of Police, Coochbehar, Abhishek Gupta just two days before the date of election is arbitrary, motivated and biased," his letter, accessed by news agency PTI, read.

"He obliquely hinted that he (Gupta) will be replaced or removed by the Election Commission.

"Your action clearly indicates that such a decision has been taken as per his instructions and compels us to question the bona fide of this decision," he added.

The BJP leadership, meanwhile, has welcomed the Election Commission's order.

"It is a very good decision by the EC. Cooch Behar is a violence-prone district. The officer was not able to handle the situation well. There have been a number of life threatening attacks on our party candidate. Other opposition parties had also complained that the SP was working in favour of a certain political party," Dilip Ghosh, the BJP's Bengal unit chief, was quoted by news agency IANS as saying.

The Trinamool had slammed the Election Commission over its recent order in which it transferred four senior police officers. The transfers had prompted West Bengal Chief Minister Mamata Banerjee to write a sharply-worded letter to the body, alleging its decision was taken at the behest of the BJP.

The poll body had retorted by saying it was well within its right to transfer the officers. "It is unfortunate that an exercise carried out by ECI only for the duration of the Model Code of Conduct is being labelled as arbitrary, motivated at the behest of the ruling party at the Centre. It would not be correct and dignified to make such averments to prove/burnish its credentials," a senior official had written to Ms Banerjee.