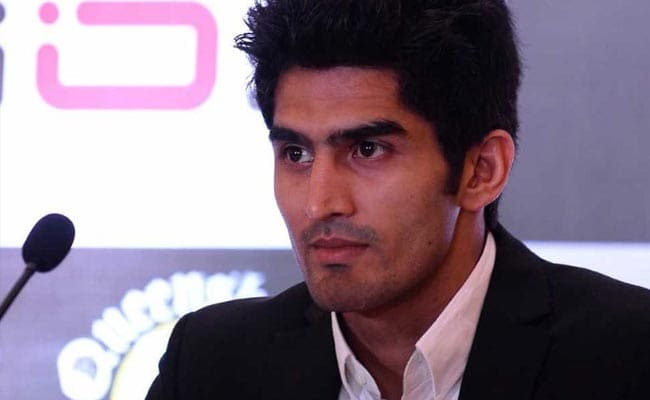 Vijender Singh, the first Indian boxer to win an Olympic medal, is the Congress's candidate for the ongoing national election in the South Delhi constituency. He is the seventh candidate the party named today for Delhi. Mr Singh has thanked party president Rahul Gandhi and general secretary Priyanka Gandhi Vadra for the opportunity.

"In more than 20 years of my career in boxing, I have always made my country proud in the ring. Now its time to do something for my countrymen and serve them. I would like to accept this opportunity and thank Congress, Rahul Gandhi and Priyanka Gandhi Vadra," Mr Singh tweeted.

Mr Singh is credited for making boxing a popular sport in the country. He was awarded Padma Shri, India's third highest civilian honour, for his contribution in the field of sports in 2010.

Sheila Dikshit, three-time Delhi Chief Minister, is among the candidates the Congress named today. There were reports that the party was planning to field Ramesh Kumar, the brother of 1984 anti-Sikh riots accused Sajjan Kumar.

Sheila Dikshit was asked to choose where she wanted to contest and she reportedly preferred North East Delhi over East Delhi.

Kapil Sibal is missing from the list; the senior Congress leader and former union minister reportedly decided against contesting from his traditional seat Chandni Chowk. Sources say he was reluctant to fight in a triangular contest with the BJP and AAP, which may be the case for other seats too.

Sheila Dikshit, who took over as the chief of the Delhi Congress earlier this year, will contest from North East Delhi. Her predecessor Ajay Maken will contest as the Congress candidate from New Delhi.

The party released its list of candidates after talks of an alliance with the Aam Aadmi Party went south.

Voting in Delhi will take place on May 12; the results will be announced on May 23.