Locust containment measures and sprinkling operations have been conducted in 303 locations spread over more than 47,000 hectares till Wednesday.

Rajasthan is the worst affected state in the locust attack.

Massive swarms of desert locusts are destroying crops across western and central India, spearing into Maharashtra, Uttar Pradesh and Punjab now, after Rajasthan, Gujarat, Madhya Pradesh and Haryana, as the government said it has stepped up its response to the country's worst locust attack in nearly three decades.

Locust containment measures and sprinkling operations have been conducted in 303 locations spread over more than 47,000 hectares till Wednesday in 20 districts of Rajasthan, nine in Madhya Pradesh, two in Gujarat and one each in Uttar Pradesh and Punjab, sources in the Agriculture Ministry said.

The government is using specialised spraying machines and has set up 11 control rooms to coordinate the response. Agriculture Minister Narendra Singh Tomar is closely monitoring the situation and held three meetings with state agriculture ministers and representatives of pesticides companies, officials said. The government is also inviting tenders for drones for aerial spraying of insecticides.

India's locust infestation this year is the worst in 26 years, an official said.

The pest, which threatens vegetable and pulse crops, have not impacted rabi (winter) produce in India but the government efforts are on to eliminate the insects before monsoon in order to save kharif crops, officials from the Locust Warning Organisation (LWO) said on Wednesday.

After attacking crops in Madhya Pradesh, a swarm of locusts reached Uttar Pradesh's Jhansi district on Wednesday, a government official said. Other districts in the region are also on alert.

In Maharashtra, swarms of locusts that had entered Katol and Parseoni in Nagpur district over the last four days might move towards Ramtek city though it is difficult to predict their exact flying course, a senior agriculture department official said.

The swarms stretching up to 17 km in length had first entered farms in Fetri, Khangaon in Katol in Nagpur district and in Ashti taluka in Wardha district on Saturday night and Sunday where they damaged orange crop and vegetable plantations in some areas, before moving towards Parseoni tehsil on Monday night.

Punjab too has been put on high alert for the infestation and control rooms have been set up in each district and farmers have been asked to report any activity of locusts, Punjab Director Agriculture Sawtantar Kumar Airi said. 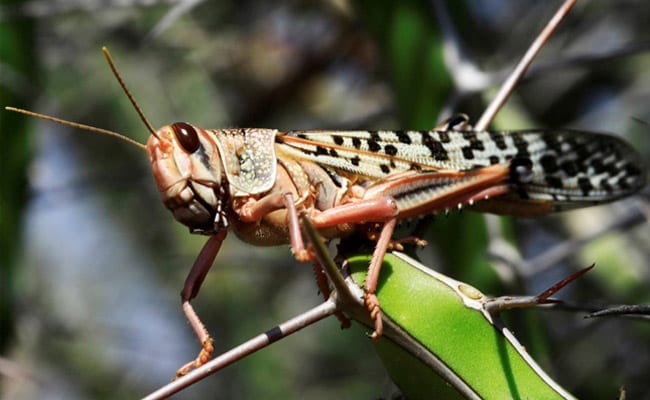 Locusts belong to the family of grasshoppers and are usually harmless but certain environmental conditions like monsoon and heavy cyclones make them reproduce faster. The swarm is highly mobile and covers 50 to more than 100 km in a day.

"There is a continuous locust invasion from Pakistan. It is not a new problem and we had been facing it for a long time. This year, the locusts attack is worse in 26 years. However, a coordinated effort has been made to curb its spread," a senior official from the Faridabad-headquartered LWO told news agency PTI.

According to the UN body Food and Agriculture Organisation (FAO), the locusts attack pose a threat to food security of the affected countries as an adult locust can eat a quantity equal to its weight of about 2 grams every single day.

A single square kilometre of the swarm can contain somewhere between 4 to 8 crore adult locusts. Every single day, if they cover 130-150 km, they can eat the food consumed by as many as 35,000 people, it said.