Nitish Kumar will now ask for a second appointment with Bihar governor for which he will be accompanied by Tejashwi Yadav. 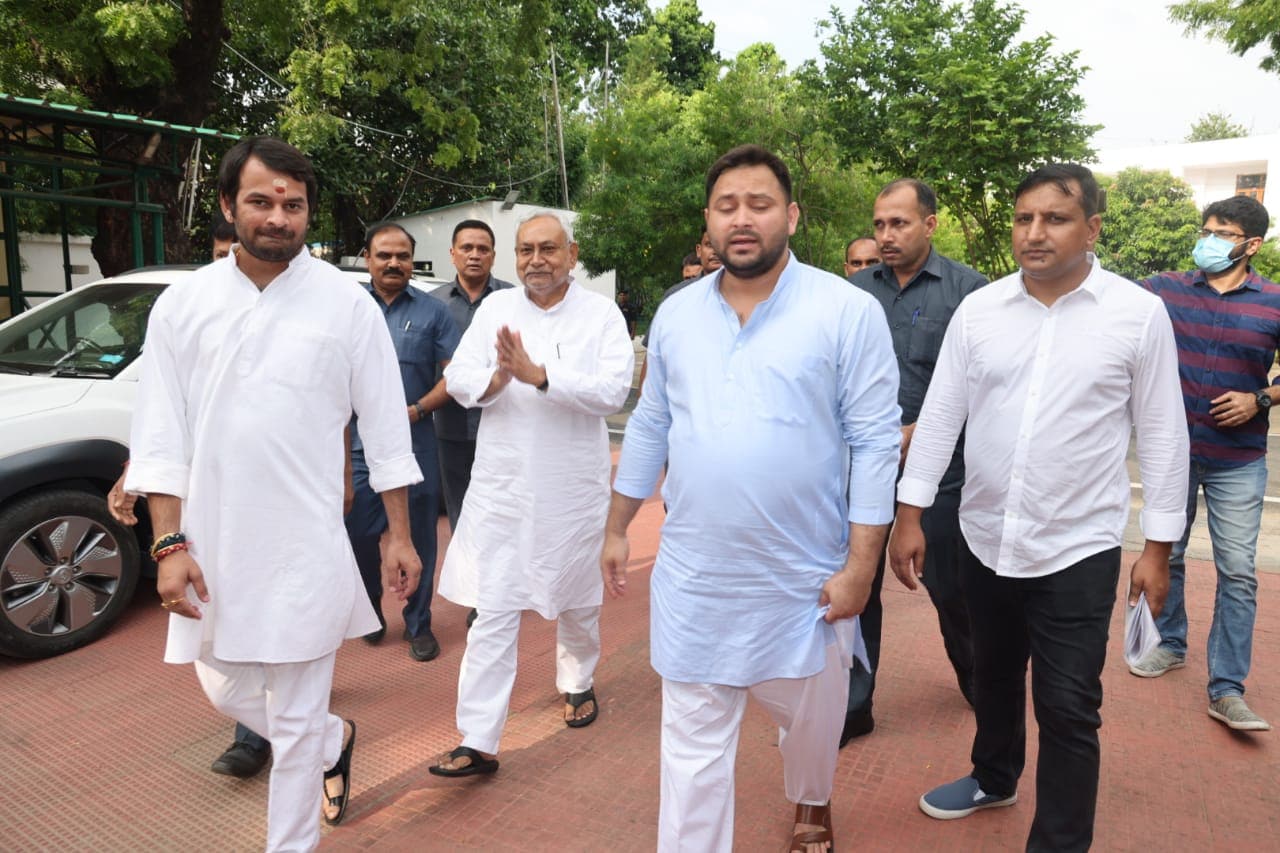 Nitish Kumar broke his alliance with BJP in the state earlier today.

Bihar Chief Minister Nitish Kumar today resigned as the chief minister, hours after ending his alliance with BJP in the state. Earlier today, he held a meeting with all Janata Dal (United) MLAs about the break-up with the BJP.

All MLAs and MPs of the party supported Mr Kumar's decision and said that they were with him. They also asserted that they will continue to support Nitish Kumar in his decision.

The tension between the two parties hit breakpoint over Nitish Kumar's concerns that Union Minister Amit Shah is working relentlessly to split the Janata Dal (United). To this end, Nitish Kumar blames RCP Singh, a former leader from his own party, for serving as Amit Shah's proxy. RCP Singh quit the JDU on the weekend after his party accused him of deep corruption.

Here are the Highlights on Nitish Kumar vs BJP:

Get NDTV UpdatesTurn on notifications to receive alerts as this story develops.
Aug 09, 2022 21:37 (IST)

Nitish Kumar, Tejashwi Yadav Stake Claim In Bihar To Form JDU-RJD Government
On why he has walked out the BJP-led NDA, Nitish Kumar said, "Our party unanimously wanted to exit that alliance. I could no longer ignore it."
Aug 09, 2022 18:41 (IST)
BJP knows only to intimidate: Tejashwi Yadav
JP Nadda said they'll end regional parties. BJP knows only to intimidate and buy people. All of us wanted the BJP's agenda shouldn't be implemented in Bihar, we all know Laluji stopped 'Rath' of Advaniji, we won't relent at any cost, Tejashwi Yadav said.
Aug 09, 2022 18:30 (IST)
BJP destroys parties it forms alliance with: Tejashwi Yadav
Across the Hindi heartland, BJP does not have any alliance partner, history tells that BJP destroys the parties with whom it forms an alliance. We did see that happening in Punjab and Maharashtra, says RJD leader Tejashwi Yadav
Aug 09, 2022 18:26 (IST)
Nitish Kumar says will form new government with support of 7 parties, 1 independent
"I came here to meet Governor and gave my resignation. There are 7 parties including 164 MLAs along with Independents in Mahagathbandahan," Nitish Kumar told the media.
Aug 09, 2022 17:30 (IST)
Nitish Kumar, Tejashwi Yadav Meet Bihar Governor To Stake Claim
"I've resigned," said Nitish Kumar this evening, hours after his party signed off on his decision to end his alliance with the BJP in Bihar. Not long after, he was seen marching to the governor's home with opposition leader Tejashwi Yadav.
Aug 09, 2022 16:26 (IST)
Congress holds meetings to decide on possible support to Nitish Kumar
The Congress has begun a series of meetings in Bihar to decide its stand on possible support to Nitish Kumar.
Aug 09, 2022 16:22 (IST)

Opinion: Nitish Kumar Ruled Again By Ambition To Be PM
A swearing-in with new partners is on the cards and so is floating new ambitions. Nitish Kumar in a nutshell.
Aug 09, 2022 16:15 (IST)

Many JD(U) MLAs, MLCs told CM Nitish Kumar in the meeting that their present alliance is trying to weaken them since 2020. Without naming Chirag Paswan, they said he was one such example; also said they if they're not alert now, it won't be good for the party: Sources

Aug 09, 2022 14:55 (IST)
Nitish Kumar To Pick Ministers, Tejashwi Yadav To Be Deputy
The Mahagathbandhan 2.0 will begin where the first alliance between Nitish Kumar and the Rashtriya Janata Dal had left off, sources in Lalu Yadav's party had indicated.
Tejashwi Yadav will be back as Mr Kumar's deputy and his elder brother Tej Pratap Yadav will be in the cabinet, sources said.
While Mr Kumar's break-up with the BJP has been described as a bloodless coup, the path of the split and the details of the next government were being worked out over the last three or four months, sources indicated.
Aug 09, 2022 14:39 (IST)

"This is not something that happened overnight": Javed Ansari (@javedmansari), Senior Journalist on Nitish Kumar ending the alliance with BJP in Bihar pic.twitter.com/lyTrM4cBn4

Nitish Kumar Dumps BJP Again, Will Meet Governor Next: 10 Points
Nitish Kumar has ended his alliance with the BJP in Bihar and will meet the Governor early this evening to resign as Chief Minister.
Aug 09, 2022 14:12 (IST)

BJP's Core Committee meeting to be held today at party office in Patna.

Aug 09, 2022 14:11 (IST)
NDA On Brink Of Disintigration In Bihar
Amid hectic political moves in Bihar where the ruling NDA government appears to be on the brink of disintegration, Chief Minister Nitish Kumar is likely to meet Governor Phagu Chauhan later in the day, sources close to the development said.
Mr Kumar, who has been promised the support of opposition parties, sought time from Mr Chauhan, who has given an appointment at 4 pm, they said.
A meeting of the RJD-led Grand Alliance, comprising the Left and the Congress, also took place at Rabri Devi's house, across the street from the chief minister's residence where all the MLAs are said to have signed a letter of support to Kumar.
Leader of the opposition Tejashwi Yadav is likely to visit the CM's residence to hand over the letter of support any time.
Aug 09, 2022 14:03 (IST)

Another big reason why PM @narendramodi and @AmitShah ran away and SHUT DOWN #ParliamentMonsoonSession FOUR DAYS EARLY https://t.co/JjOq1toBky

Aug 09, 2022 13:19 (IST)
Nitish Kumar Ends Alliance With BJP In Bihar
Bihar chief minister Nitish Kumar on Tuesday ended his party's alliance with the BJP.
Nitish Kumar met with his MLAs before coming to his decision on dumping the BJP for a second time.
"Expect explosive news," a senior leader from his party had said ahead of the meeting.
A senior source from the BJP who asked not to be named had also warned, "Expecting this alliance to survive is like a very sick patient's family refusing to give up hope."
The tension between the two parties hit breakpoint over Nitish Kumar's concerns that Union Minister Amit Shah is working relentlessly to split the Janata Dal (United).
Aug 09, 2022 13:04 (IST)
Bihar Speaker Tests Covid Positive, Recovers In A Day
A day after he tested positive for COVID-19, Bihar Assembly Speaker Vijay Kumar Sinha said his test reports have come out negative, amid a brewing political storm in the state, where he will play a key role in determining the legitimacy of any new formulation.
Mr Sinha, a BJP MLA, ebulliently announced on Twitter that his test reports on Monday were negative. A day earlier, he had tested positive.
Many took to the micro-blogging site to express astonishment at the speed with which the Speaker was declared Covid negative, and the fact that the health portfolio is also held by BJP's Mangal Pandey.
Aug 09, 2022 13:02 (IST)

How Nitish Kumar And Tejashwi Yadav Hit A Hard Reset: 6 Facts
Nitish Kumar's break-up with the BJP today comes on the back of an understanding with Tejashwi Yadav, developed over the last few months, that they would work together for a second time to form the government in Bihar.
Aug 09, 2022 12:35 (IST)

Nitish Kumar To Meet Governor, Indicating It's Over With BJP: 10 Points
It's all but over, said senior leaders from the BJP and Nitish Kumar's party to NDTV this morning, as the Chief Minister fixed an appointment to see the Governor.
Aug 09, 2022 12:30 (IST)
Nitish Kumar Seeks Appointment From Governor Phagu Chauhan
Bihar Chief Minister Nitish Kumar has sought an appointment with Governor Phagu Chauhan, sources said on Tuesday.
This came after the chief minister chaired a meeting of JD(U) legislators and MPs at the residence of Mr Kumar in Patna following the resignation of party leader RCP Singh on Saturday.
Meanwhile, Congress and Left party leaders and MLAs also converged today at the residence of Rabri Devi here for a meeting convened by the opposition RJD.
The BJP also held a meeting of its top leaders at Deputy Chief Minister Tarkishor Prasad's residence here.
Aug 09, 2022 11:51 (IST)

Aug 09, 2022 11:40 (IST)
Parallel Meetings Underway
Parallel meetings of the JD(U) which helms the Bihar government, and the opposition RJD are on amid speculations of a major political move by Chief Minister Nitish Kumar.
The meeting of JD(U) MPs and MLAs is being held at the chief minister's official residence, party sources said.
The meeting of the RJD legislators is convened by party leader Tejashwi Yadav at his mother Rabri Devi's Circular Road bungalow, a stone's throw from the CM's Anney Marg residence.
The BJP is also holding a meeting at Deputy Chief Minister Tarkishor Prasad's residence and among those present there include party's state unit president Sanjay Jaiswal.
More than one of the prospective attendees of the JD(U) meeting denied that the party's ties with THE BJP have worsened to an extent to call for a realignment.
Aug 09, 2022 11:26 (IST)

If Nitish Kumar comes, we'll welcome him. If he comes we will support him.A meeting of Mahagathbandhan is being held.We should take a decision to support (him) by considering Nitish Kumar as the CM but we'll be able to tell you only after the meeting: Ajit Sharma, Congress, Bihar pic.twitter.com/BW3SROdAAY

As Parties Scramble Over Uncertain Bihar Coalition, What The Numbers Say
If the RJD, after its big meeting today, supports Nitish Kumar, a new formation with JDU, RJD, Congress, HAM, and CPIML will comfortably cross the majority mark with a total of 159 MLAs.
Aug 09, 2022 10:29 (IST)

JD(U) to hold a meeting today at 11 am, amid reports of the party's rift with ally BJP in the state. | reported by news agency ANI pic.twitter.com/lLkrTXaOH5

Bihar | RJD MLAs & leaders arrive at the residence of party chief Lalu Prasad Yadav, in Patna. The party will hold a meeting at 11 am today amid reports of rifts b/w JD(U) & BJP in the state.

Mobile phones of all MLAs are being kept outside the meeting room. pic.twitter.com/DFZP54bOvp

Aug 09, 2022 09:11 (IST)
JDU, RJD To Hold Parallel Meetings
Members of both houses of Parliament and state legislature, belonging to Bihar Chief Minister Nitish Kumar's JD(U), converged here on Tuesday to attend a meeting at his official residence, amid speculations of a major political move by the veteran leader, senior party functionaries said.
The meeting is scheduled to commence at 11 AM.
While the outcome will be known once the meeting is over, more than one of the prospective attendees denied the party's ties with the BJP having worsened to an extent to call for a realignment.
Aug 09, 2022 07:32 (IST)
"Everything Fine In NDA Alliance": JDU Leader Amid Rift Speculation
With the ongoing speculations about a rift between the Bharatiya Janata Party (BJP)-Janata Dal (United) ie the NDA alliance in Bihar, Janata Dal (United) leader and former Union Minister, Upendra Kushwaha, on Monday cleared the air of any tension between the allies and said that everything's fine in the alliance.
"Yes absolutely...everything is fine in the NDA alliance..Today we are not making any claim but Nitish Kumar has all the qualifications to become the Prime Minister," said Mr Kushwaha.
His remarks came in wake of the Bihar Chief Minister Nitish Kumar skipping the NITI Aayog meeting and JD-U leader RCP Singh tendering his resignation.
Taking a jibe at Mr Singh, Mr Kushwaha said, "RCP Singh's statement is very objectionable and shows his mental bankruptcy."