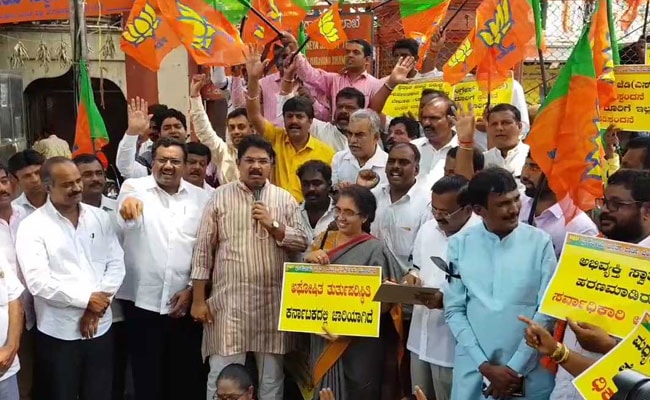 The BJP today held a protest here against Karnataka minister MB Patil over the ongoing controversy surrounding a "forged" letter purportedly sent from Mr Patil to Sonia Gandhi with suggestions to divide the state's Lingayat community so as to benefit Congress votes. The Lingayats are a dominant caste in northern Karnataka and are seen as a BJP vote bank.

Mr Patil has denied writing the letter, which the police believe is false. Two journalists were arrested in connection with the matter and later released on bail.

BJP lawmaker PC Mohan, who was at the protest, told NDTV, "Today we are protesting against the JDS and Congress state government. For the last one and a half to two months, (during) election time, they have started arresting BJP sympathisers - people who are supporting the party on social media".

He added, "We are protesting against this. It looks like they have declared an Emergency. Today we don't have any right to speak about the government and what they are doing wrong".

Former Karnataka deputy Chief Minister R Ashoka led the protests and said, "We are protesting against the arrest of social media people, those who are supporting the BJP. They are targeting only BJP supporters. It is not a democracy, failure of democracy".

The BJP has claimed this is a deliberate attempt to target its party supporters.

Tejaswini Ananth Kumar, wife of late Union Minister Ananth Kumar, was also at the protest and said, "We are protesting against the harassment of our well-wishers regarding the expression of their own opinions. Unnecessarily, the Karnataka police are arresting our social media warriors and putting them in jail without giving any reason".

BJP lawmaker Shobha Karandlaje had written to the Home Minister claiming the arrest of journalist Hemant Kumar in connection with the Lingayat letter was an example of "vindictive action of Karnataka Home Minister targeting BJP workers." She also said the state government was indulging in a witch hunt against party sympathisers.

The letter first surfaced before Assembly elections in the state last year and re-appeared just before the ongoing Lok Sabha election. The state wing of the BJP had tweeted a copy of the letter, claiming it to be genuine.

Mr Patil has filed a complaint in this matter and the case has been handed over to the CID.