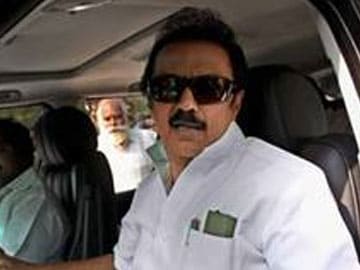 The case arose from a complaint filed by one Seshadri Kumar against Mr Stalin and his son in, alleging land grab at Teynampet in Chennai in. The state police registered a case of extortion against the DMK leader. A compromise was, however, reached later between the complainant and Mr Stalin.

The Madras High Court quashed the case against Mr Stalin and his son on account of the compromise in April 2012.

Soon after, the Jayalalithaa government appealed in the Supreme Court against the High Court order. Today the state argued that extortion was a heinous offence  and extortion by a powerful political figure was a threat to society and a crime, and, hence, the state must be allowed to continue proceed against Mr Stalin.

The complainant's lawyer argued that even though his client was initially threatened, he was later paid more money for the land. He argued that both the buyer and seller are happy with the deal and the state's case was politically vitiated.

Promoted
Listen to the latest songs, only on JioSaavn.com
After hearing the arguments, the Court dismissed the Tamil Nadu government's appeal by saying, "Let there be peace."