The BJP's manifesto for the April 6 polls, said the upper house of the legislature would be revived, "to allow experts from various fields to debate and participate in the legislative process." 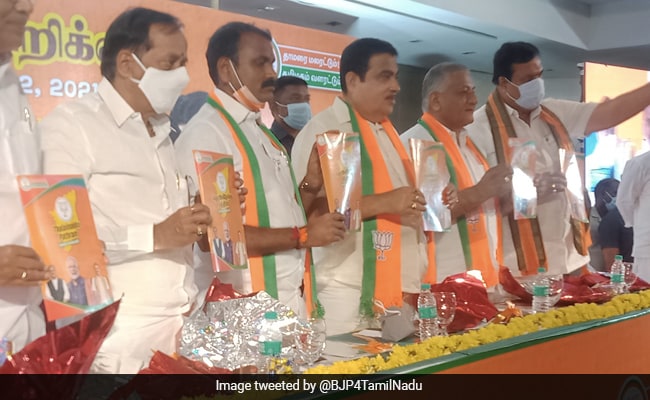 BJP also assured freeing Hindu temples from the control of the state government.

The BJP on Monday promised revival of the legislative council in Tamil Nadu, which was abolished decades ago by its ally, the ruling AIADMK, if their combine was voted to power in the coming assembly elections.

The BJP's manifesto for the April 6 polls, said the upper house of the legislature would be revived, "to allow experts from various fields to debate and participate in the legislative process."

The council was abolished in 1986 when AIADMK founder MG Ramachandran was the Chief Minister and since then the Dravidian party has taken a stand against its revival.

Though the DMK made attempts including in 2010 when it was in power to bring back the council, it did not fructify.

In its manifesto for the assembly polls, the DMK has also promised revival of the legislative council.

The BJP manifesto, released by senior leader and Union Transport Minister Nitin Gadkari, said 12 lakh acres of ''Panchami'' land would be recovered and handed back to the Scheduled Castes.

Assigned originally for Dalits to better their living conditions during the British era, Panchami lands, however, fell into the hands of others as well with the passage of time.

BJP assured freeing Hindu temples from the control of the state government.

"The administration of Hindu temples will be handed over to a separate board comprising Hindu scholars and saints."

For decades, the Sangh Parivar outfits in Tamil Nadu, first the Hindu Munnani and then the BJP have been demanding that over 30,000 temples across the state under government control be freed and handed over to a body of saints and devotees.

As many as 50 lakh new job opportunities, financial assistance of Rs 6,000 a year to fishermen like farmers, commitment to ushering in prohibition of alcohol, a separate budget for agriculture, free tablets for school students (classes 8 and 9) were among the other assurances.

The BJP also promised free two-wheeler driving license to women in the age group of 18-23, door delivery of ration commodities to beneficiaries, multi-specialty hospitals at all district headquarters and supply of pure drinking water to every household (before the end of 2022) under the ''Jal Jeevan Mission''.

BJP Counter-Protest On Parliament Premises Against Stir By Suspended MPs