The BRS is counting on the support of JD(S) leader and former Chief Minister H D Kumaraswamy in Karnataka. 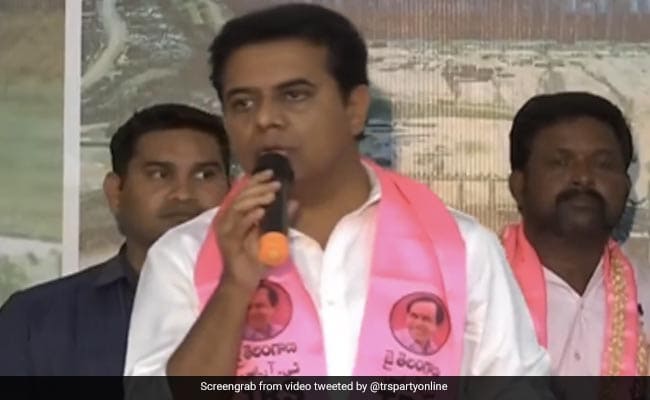 The Bharat Rashtra Samiti (BRS) is primarily targeting the 2024 Lok Sabha elections and it would like to start work from neighbouring Maharashtra, party leader K T Rama Rao said on Friday.

The ruling Telangana Rashtra Samiti (TRS) in Telangana has been rechristened as BRS, after the party decided to go national.

Citing the example of AAP's success in Punjab after Delhi, Rama Rao, son of Chief Minister K Chandrasekhar Rao, said his party would like to first focus on neighbouring states like Maharashtra and Karnataka as the good work done in Telangana is best known there.

The BRS would work in Maharashtra in view of farmers' suicides and the alleged crisis in agriculture, he indicated, in an informal interaction with the media here.

The BRS is counting on the support of JD(S) leader and former Chief Minister H D Kumaraswamy in Karnataka.

In a trenchant attack on BJP and the NDA government at the Centre over its politics of 'hatred' and attack on federalism, Rama Rao said the BRS would like to present the successful 'Telangana model" of welfare and development to the country.

He alleged that unemployment, inflation and LPG price in the country have risen sharply.

On the other hand, Rama Rao said he can project the rise in per capita income, IT exports, agriculture produce, GSDP and the numerous welfare schemes being implemented in Telangana.

If the new state of Telangana can achieve supply of drinking water to every household, 24x7 free power to farmers and implement schemes like 'Rythu Bandhu' investment support scheme for farmers in 8 years, why can't the same be replicated across other states in the country? he asked.

Noting that Telugu films were doing well pan-India, he sought to know why a Telugu party or leader would not get acceptance if there is intrinsic strength.

Alleging that the central government misuses agencies like ED and CBI to target the opposition parties, he said the BRS would face any such conspiracies against it.

The BRS would expose the BJP over its alleged failures and misdeeds.

Rama Rao claimed that there was a 'political vaccum' in the country at present with the Congress failing "miserably".

The Congress is facing an existential crisis, he claimed.

KCR has made it clear that he will continue to be the CM and present the "Telangana model" to the rest of the country, he said.

To a query if campaigning in Gujarat polls was being considered, he said the party chief would take a call on such issues, as the outfit is not recognised yet as a national party.

Rama Rao expressed hope that the Election Commission would accept the resolution passed by TRS General Body on October 5, changing the name of TRS to BRS.

Meanwhile, reacting to Rama Rao's comments that the NDA government misused agencies like ED and CBI, BJP spokesperson N V Subhash said the BRS need not be afraid of any raids if its leaders are not involved in any corruption.

JD(S) leader Kumaraswamy on Thursday said the Bharat Rashtra Samithi (BRS) has no intention to contest Assembly polls in Karnataka, but is mulling fielding candidates in a couple of constituencies in border areas for the next Lok Sabha polls.