The widely shared video from Muzaffarnagar shows two men verbally abusing a man while thrashing him. 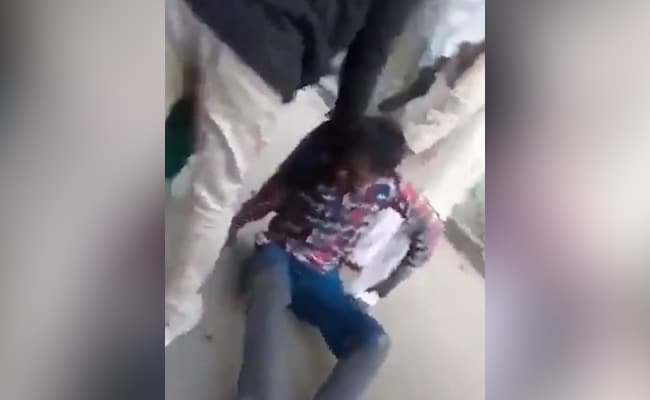 Sharing a video of a man's brutal assault by two others, Congress general secretary has said the BJP has failed to ensure the safety of Dalits in Uttar Pradesh and its leaders pretend to care about them only during elections.

The widely shared video that the Congress leader tweeted shows two men verbally abusing a man while thrashing him. One of the men takes off a sandal and starts beating him. The other puts a scarf around his neck and drags him on the ground while hurling abuses. The man is then grabbed by the collar of his shirt and dragged further.

News agency PTI reported that two people have been arrested for allegedly assaulting the Dalit man in Muzaffarnagar. The incident took place in Biharigarh village in the district, police said.

The arrested men have been identified as Sanjay Kumar, the village head's husband, and his relative Omprakash.

According to villagers, a panchayat meeting was called to resolve a dispute between two sides. When the youth confronted Kumar and Omprakash, they allegedly thrashed him with a shoe and dragged him.

Further investigation into the matter is underway, senior police officer Abhishek Yadav was quoted as saying.

Targeting the Yogi Adityanath government on a day the state is witnessing the fourth phase of polling for a crucial Assembly election, Ms Vadra questioned the law and order situation in the state, which the BJP government has played up during its campaign.

"Is this your law and order system in which Dalits are picked up from their homes and beaten mercilessly, tortured," the Congress leader tweeted.

Top BJP leaders, including Prime Minister Narendra Modi, have claimed that the party's incumbent government restored law and order in the state. The ruling party has alleged that the previous government of Samajwadi Party, the prime challenger in this election, backed goons and mafia.