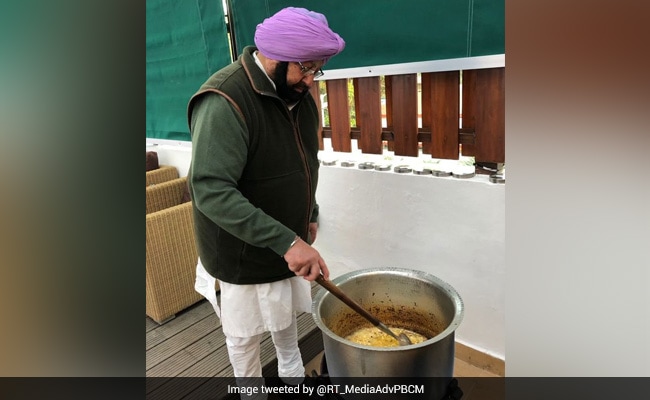 Amarinder Singh will himself be preparing the dishes for the dinner. (FILE)

Punjab Chief Minister Amarinder Singh will be cooking a wide array of dishes, including pulao, lamb and zarda rice, for the Olympic medal winners from the state. Mr Singh is hosting a dinner for the Olympians on Wednesday. Neeraj Chopra, the gold medal winner, from neighbouring Haryana has been invited as well.

"From Patiala cuisine to pulao, lamb, chicken, aloo and Zarda rice, CM @capt_amarinder will prepare each of these delicacies himself to keep his promise to Punjab Olympic medal winners (& Neeraj Chopra) at the dinner he's hosting for them tomorrow!" said Raveen Thukral, media advisor to the Punjab Chief Minister, in a tweet.

From Patiala cuisine to pulao, lamb, chicken, aloo & Zarda rice, CM @capt_amarinder will prepare each of these delicacies himself to keep his promise to Punjab Olympic medal winners (& Neeraj Chopra) at the dinner he's hosting for them tomorrow!
(file pic) pic.twitter.com/X9iOF16N5m

Amarinder Singh had invited the Tokyo Games stars from Punjab to a dinner, promising to cook for them, during an event last month to honour them. Neeraj Chopra was also invited to the event but he couldn't attend.

"I am not too fond of eating but I do like cooking quite a bit. I will cook for all of you... All medallists will also be offered jobs by the Punjab government. We will have schools and roads named after you," he said at the event.

The Olympic medal winners and participants were given cash awards worth over Rs 32 crore by the Chief Minister, according to news agency PTI.

Earlier, the Punjab government increased the cash award money for the Olympic medalists with a view to further promote sports in the state.

Cash rewards for 11 players from the state, who were part of the Indian hockey team that won the bronze medal after 41 years, was raised from Rs 1 crore to Rs 2.51 crore each, Punjab Sports Minister Rana Gurmit Singh Sodhi said.