Farmers' Body 'Rail Roko' Protest: Samyukta Kisan Morcha put out a call to its constituents to stop rail traffic for six hours on October 18, between 10 am and 4 pm. 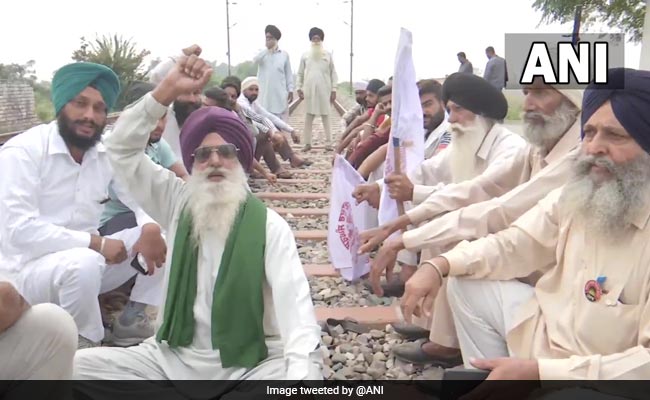 The Samyukta Kisan Morcha (SKM) called for a six-hour-long nationwide ''Rail roko'' agitation on Monday demanding the removal of Union Minister of State (MoS) for Home Affairs Ajay Mishra Teni from the Union Cabinet over the Lakhimpur Kheri incident, in which his son Ashish Mishra Teni is an accused.

A statement issued by the umbrella body of farmers' unions read, "To press for its demand for Ajay Mishra's dismissal and arrest, so that justice can be secured in Lakhimpur Kheri violence, SKM has announced a nation-wide rail roko program on October 18."

"SKM put out a call to its constituents to stop rail traffic for six hours on October 18, between 10 am and 4 pm. SKM asked for this action to be taken up peacefully, without any destruction and damage of any kind to any railway property," it further read.

A total of eight people including four farmers died in the Lakhimpur Kheri violence. SKM had alleged Ashish Mishra shot a farmer while the others were run over by the vehicles of his convey.

However, MoS Teni had refuted the allegations saying that his son was not present at the site of the incident. Ashish reiterated the same and refuted SKM's allegations.

Later, three people, including Ashish Mishra, were arrested in the case.

4 Including BJP Leader In SUV That Mowed Down Farmers In UP Arrested
Four more people, including a BJP leader who was seen inside the SUV that mowed down protesting farmers in Uttar Pradesh's Lakhimpur Kheri, have been arrested.
Oct 18, 2021 22:01 (IST)
Rail Roko agitation was successful, we will make further strategy: Rakesh Tikait
Bharatiya Kisan Union (BKU) spokesperson Rakesh Tikait called the Rail Roko protest called by the Samyukt Kisan Morcha (SKM) as successful. The protesting farmers are demanding dismissal and arrest of Union Minister of State Ajay Mishra.
"Rail Roko agitation was fine. We will make our further strategy. Until Teni (MoS MHA Ajay Mishra Teni) is arrested and he resigns, we will continue putting forth our views. He is an accused under sections 120(B) of the Indian Penal Code (IPC). He cannot roam in the open," he said.
Oct 18, 2021 18:02 (IST)
Not received any report of disturbance: Delhi Police
The Delhi Police said there were no reports of any disturbance in the national capital due to Samyukt Kisan Morcha's six-hour "rail roko" protest to demand the dismissal and arrest of Union Minister Ajay Mishra in connection with the Lakhimpur Kheri incident. Deputy Commissioner of Police (Railways) Harendra Kumar Singh said, "We have not received any report of disturbance in Delhi."
Oct 18, 2021 17:28 (IST)
Rail roko agitation by farmers disrupts train services in Odisha
Train services were affected in the East Coast Railway division of Odisha for around 30 minutes to one hour owing to the "rail roko" agitation by farmers, demanding the dismissal and arrest of Union minister Ajay Mishra for his alleged involvement in the Lakhimpur Kheri violence earlier this month.
The agitation call by Samyukt Kisan Morcha (SKM) - an umbrella union of the farmers -- received support from the Congress, the Left and the Aam Aadmi Party in Odisha.
Oct 18, 2021 17:05 (IST)
Meghalaya Governor offers to mediate on farmers' MSP demand
Backing the protesting farmers on their demand for the dismissal of Union minister Ajay Mishra, Meghalaya Governor Satya Pal Malik said he should have resigned immediately after the Lakhimpur Kheri violence and does not deserve the post in any case.
Mr Malik also said the BJP will not return to power unless the government listens to the farmers agitating over the agri laws, and asserted that he is ready to mediate if the Centre agrees to give legal guarantee on minimum support price (MSP) for crops.
Oct 18, 2021 16:31 (IST)
Centre has not spoken to us yet, says Rakesh Tikait
As the Samyukt Kisan Morcha (SKM) is staging a nationwide "Rail Roko" protest to demand the dismissal and arrest of Union Minister of State Ajay Mishra, Bharatiya Kisan Union spokesperson Rakesh Tikait said that the government has not spoken to them in this regard yet.
Mr Tikait said, "This protest is being staged in different districts across the country. The people of the country who support this movement know about the Rail Roko andolan. The Central Government has not spoken to us yet in this matter."
Oct 18, 2021 16:16 (IST)
All India Kisan Sabha president calls Rail Roko Andolan "successful"
As the "Rail Roko" agitation is being staged by the farmers' unions to protest against the Lakhimpur Kheri violence case, the President of All India Kisan Sabha Ashok Dhawale has called the agitation "successful".
Mr Dhawale said, "The Rail Roko agitation is successful. It has been 15 days (i.e. from October 3-October 18) since the Lakhimpur Kheri incident took place. I demand Union Minister of State Ajay Mishra Teni to be removed from the post. It is shocking to know that, despite completing 75 years of Independence, the country witnessed such incident."
Oct 18, 2021 16:01 (IST)
Four sections of Ferozepur division blocked by protesters
Farmers in Punjab and elsewhere were seen squatting on rail tracks as part of their protest. Four sections of the Ferozepur division were blocked by the protesters, said a railway official. The Ferozepur-Fazilka section in Ferozepur city and the Ferozepur-Ludhiana section at Ajitwal in Moga were affected, he added.
Oct 18, 2021 14:51 (IST)
Passengers face problems as train movement is affected due to farmers union call for 'Rail Roko' agitation; visuals from Ludhiana Railway station.
We've deployed sufficient force here to handle the law and order situation: Ludhiana Joint CP/City, Deepak Pareek 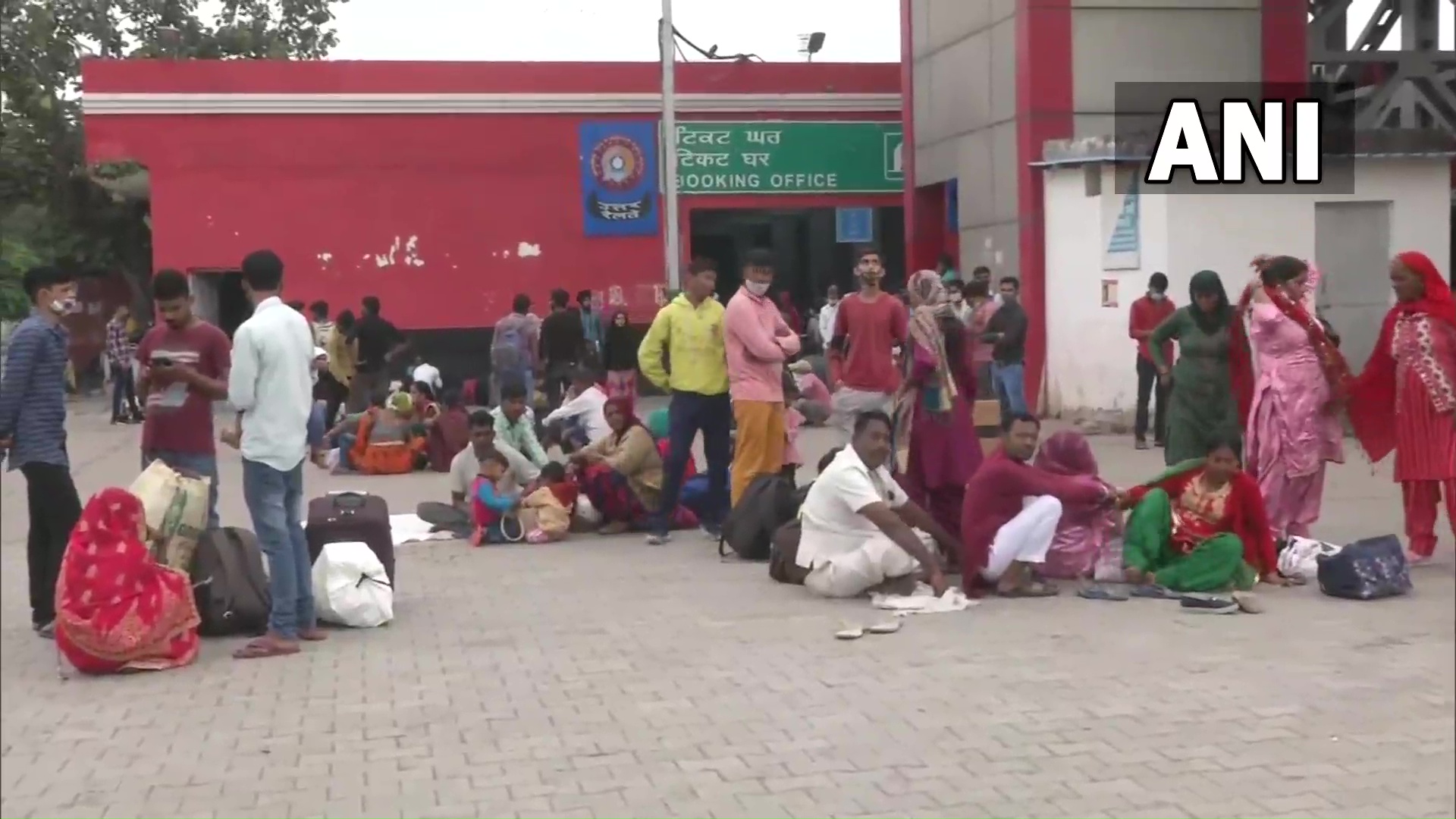 Pressing for Union Minister Ajay Mishra's dismissal and arrest over the #LakhimpurKheriViolence case in #UttarPradesh, the farmers' body is holding a six-hour-long nationwide ''#RailRoko'' agitation.

Oct 18, 2021 13:32 (IST)
Government Railway Police is patrolling all railway stations and tracks. Till now ,there are no reports of disturbance at any railway tracks or cancellation of trains. We're working in close coordination with GRP of neighbouring states: Harendra Singh, DCP Railways on 'Rail Roko'. 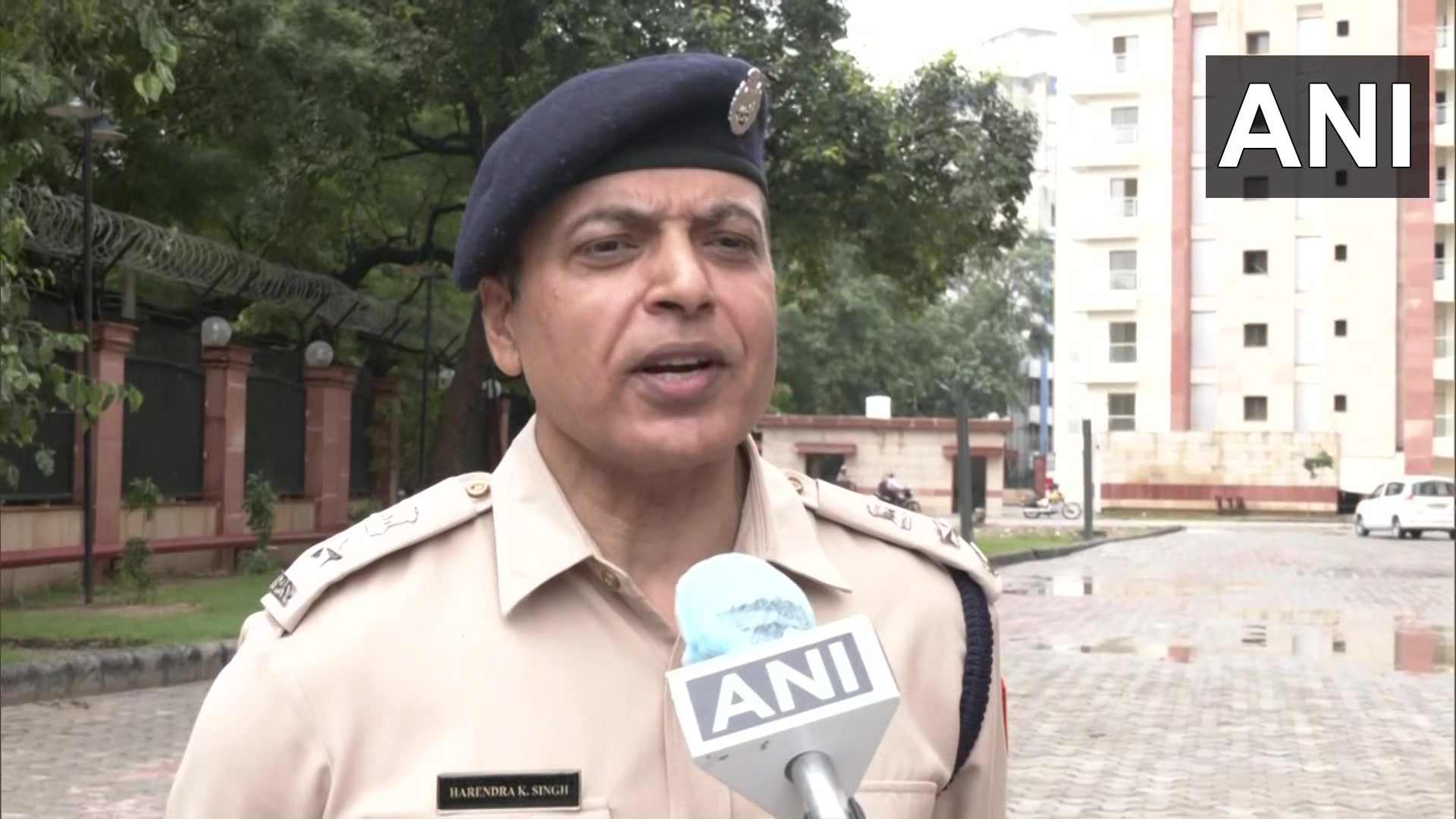 Oct 18, 2021 12:37 (IST)
Update|  Passengers of a Chandigarh bound train say they are facing trouble as the train was terminated at Dappar station in Dera Bassi tehsil of SAS Nagar district, due to the ongoing 'Rail roko' agitation by farmers' union 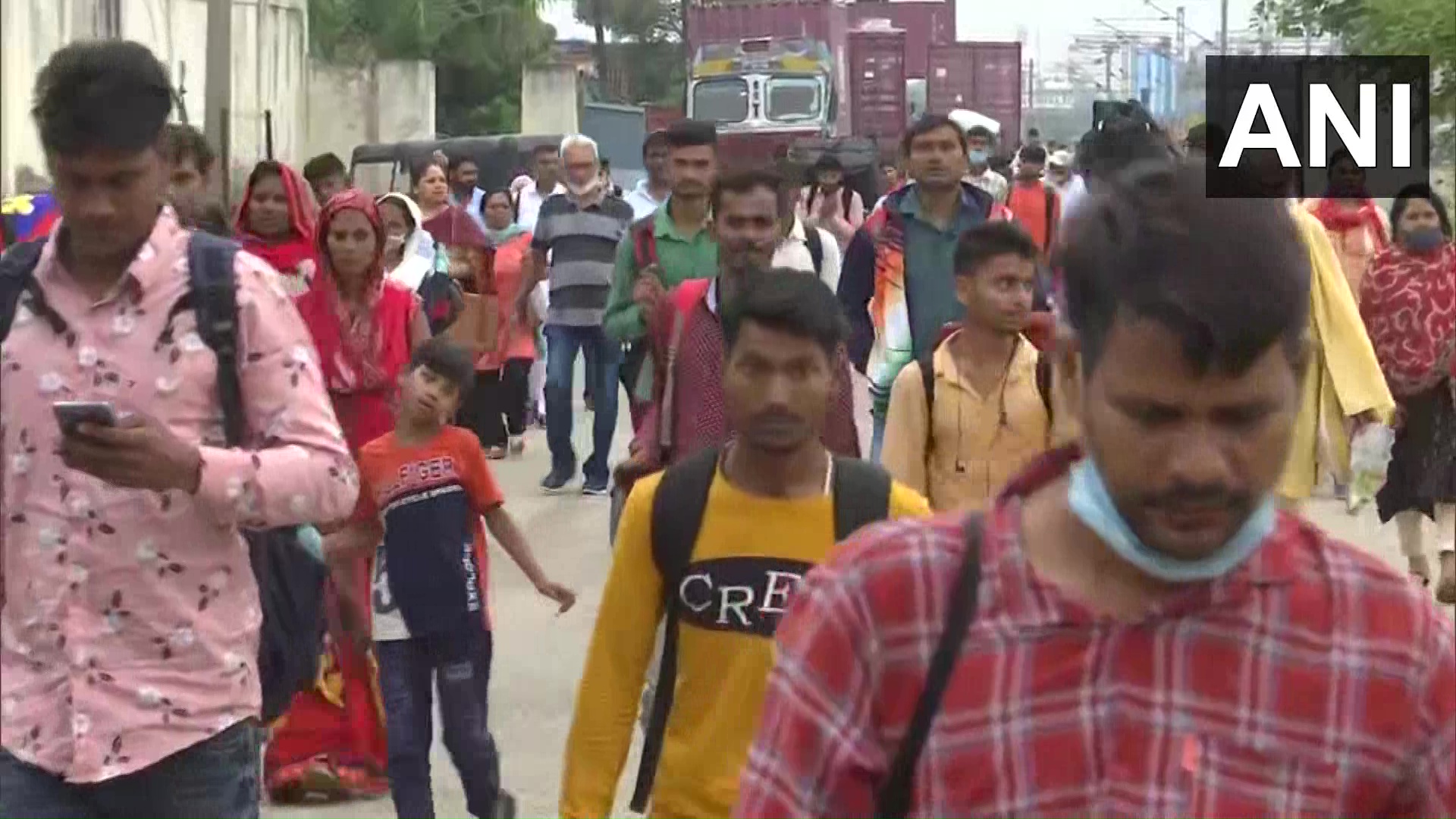 Oct 18, 2021 11:11 (IST)
Farmers block train traffic in Punjab as part of ''rail roko'' stir over Lakhimpur incident
Farmers in Punjab squatted on rail tracks on Monday morning as part of the Samyukt Kisan Morcha's six-hour ''rail roko'' protest demanding the dismissal and arrest of Union Minister Ajay Mishra in connection with the violence in Uttar Pradesh''s Lakhimpur Kheri.
A railway official said four sections of the Ferozepur division were blocked by the protesters. The Ferozepur-Fazilka section in Ferozepur city and the Ferozepur-Ludhiana section at Ajitwal in Moga were affected, the official said.
Demanding the arrest of Union Minister Ajay Mishra, Kisan Mazdoor Sangharsh Committee general secretary Sarwan Singh Pandher on Monday demanded said the KMSC will hold protests at 20 places in 11 districts of the state.
In a statement, the Samyukt Kisan Morcha (SKM), an umbrella body of farmer unions spearheading the agitation against the Centre's three agri laws, had said "protests will be intensified until justice is secured" in the Lakhimpur Kheri case.
Oct 18, 2021 10:45 (IST)
Update| Four sections of Northern railway have been blocked by farmers.
Train services on Delhi to Rohtak and Delhi to Ambala routes have been stopped for now
Oct 18, 2021 10:36 (IST)
Protestors block railway tracks at Bahadurgarh in protest against Lakhimpur Kheri incident.
Samyukta Kisan Morcha has called for nationwide 'Rail roko' in protest against the incident. 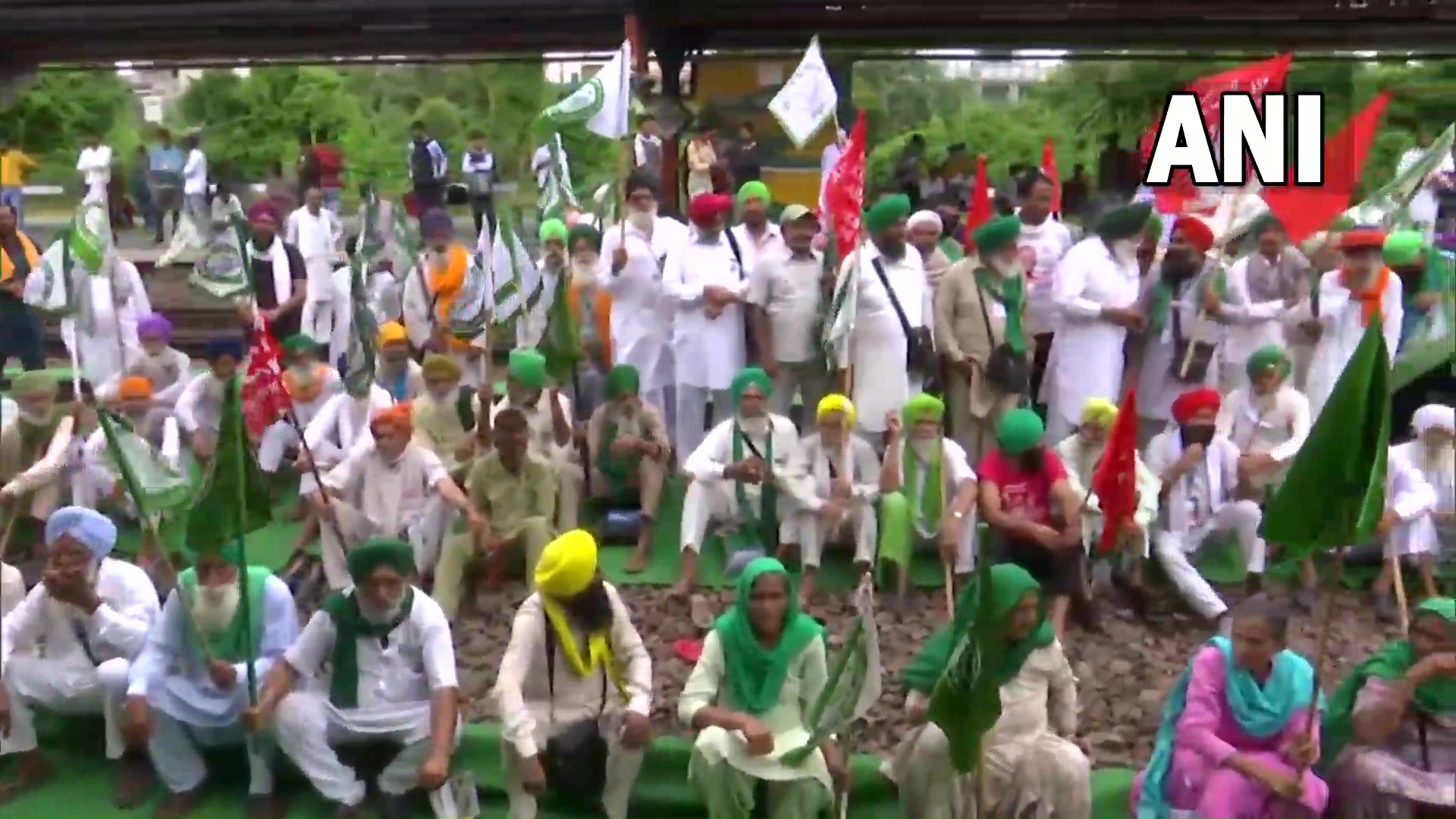 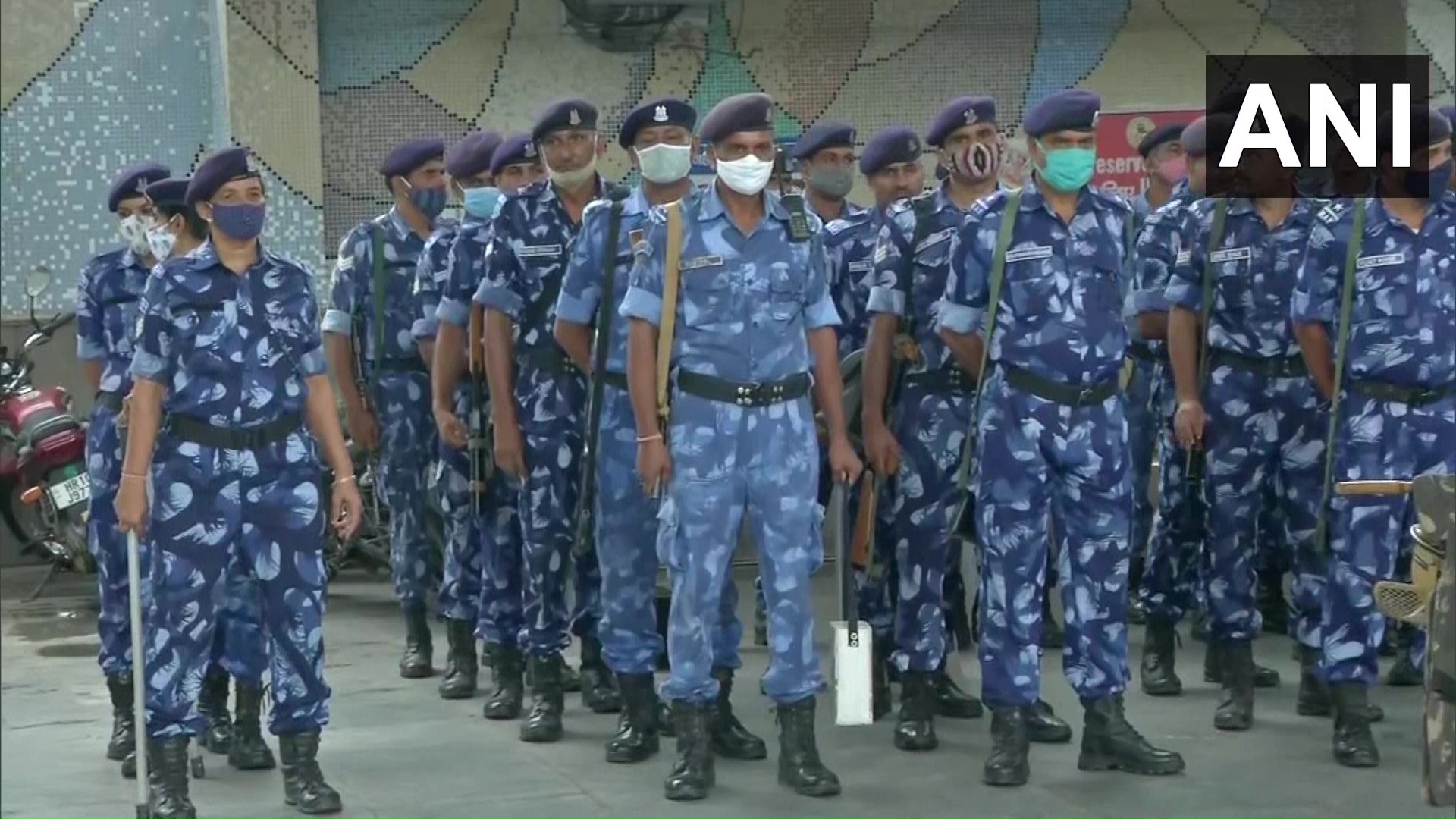 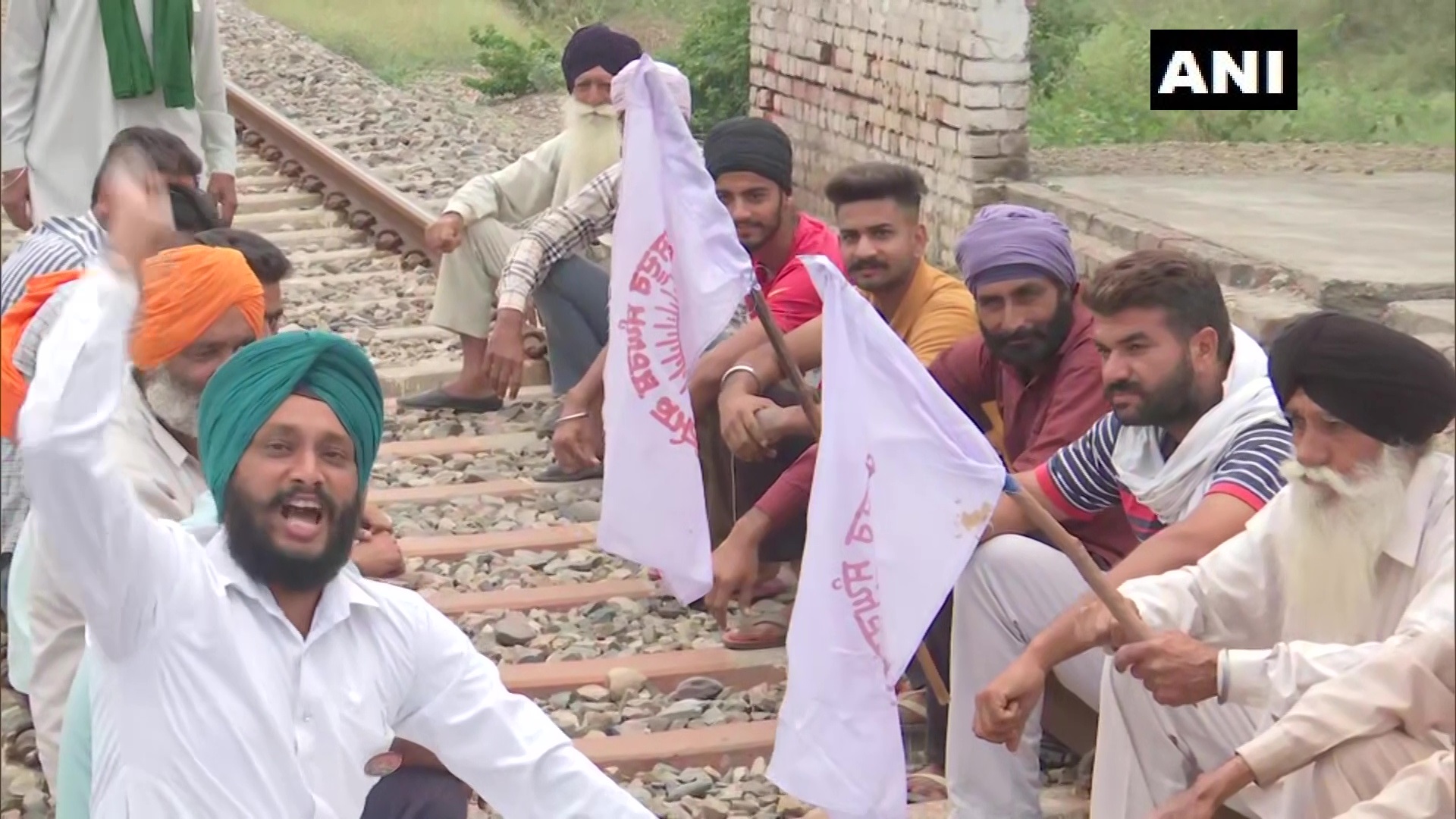 Oct 18, 2021 09:11 (IST)
Update| Police to take action against those who will participate in the 'Rail Roko Andolan' called by farmers organization. 144 CrPC is also imposed in the district and will impose NSA if anyone tries to disrupt normalcy: Lucknow Police
Oct 18, 2021 08:43 (IST)
Oct 18, 2021 08:42 (IST)
Rail Roko Today Seeks Minister's Resignation Over UP Farmers' Killing
Pressing for Union Minister Ajay Mishra's dismissal and arrest over Lakhimpur incident in Uttar Pradesh, in which his son has been arrested, the farmers' body has called for a six-hour long nationwide ''Rail roko'' agitation. Read more 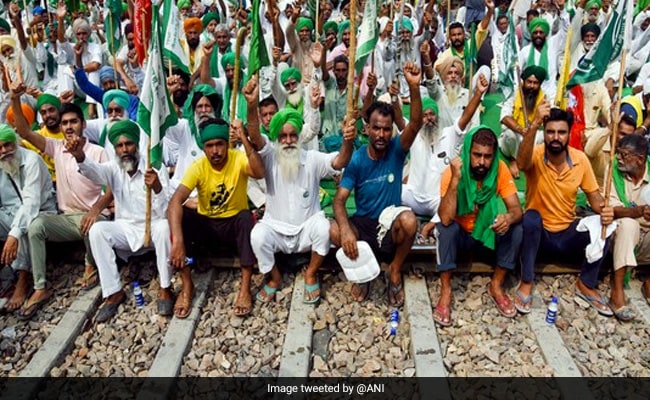