Kuldip Nayar, Doyen Of Journalism, Who Fought For Freedom of Press Dies 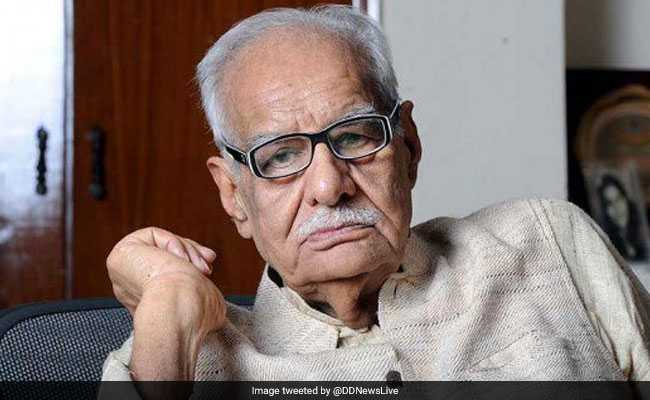 Veteran journalist, columnist, political commentator and rights activist Kuldip Nayar died at 95 on Thursday. Journalists remembered the legendary Mr Nayar for his "fearless" reportage and how he fought for liberal values. He was among the first few journalists to be jailed during the Emergency in 1975.

Born in 1924, in Sialkot province of Pakistan, Kuldip Nayar wore several hats in his career spanning over six decades. After getting a degree in law from the famous Forman Christian College in Lahore, he went to the US on scholarship to study in the Medill School of Journalism.

Mr Nayar started as a reporter in an Urdu newspaper called Anjam. Later he worked with several leading newspaper houses in the country including the Indian Express and The Statesman. He was the resident editor of The Statesman in Delhi during the Emergency and was jailed under MISA (Maintenance of Internal Security Act) for opposing it.

"I was arrested without prior notice - it stupefied me...Emergency was a curse. People were killed, but their families were not given any recognition. Riot victims got some claim, but what about widows and children who were left orphan, nobody even talk about their grievances," Mr Nayar said in an interview to The Statesman in 2015.

A prolific writer, Mr Nayar has authored 15 books. In his book 'Beyond the Lines: An Autobiography', he vividly spoke about the partition and the riots that followed, during India's struggle for Independence. He wrote about his best works as a journalist including the 1971 war and interviews with Zulfikar Ali Bhutto and Mujibur Rahman. He also talked about his candid conversation with Dr AQ Khan, often called the father of Pakistan's nuclear bomb.

Mr Nayar had come under severe criticism for his book 'India: The Critical Years' for writing about what was described as sensitive details and what reportedly happens behind the closed doors, at the high commissions. He was allegedly even placed under surveillance after the book was published.

Editorial pieces and op-eds published in over 80 newspapers across the world were very popular with readers, though he was also often criticized for his left leaning viewpoints and "conspiracy theories" as described by his critics. Peace between India and Pakistan was a topic very close to his heart, possibly because he was a witness to the aftermath of partition, as his family was forced to move to Delhi from Sialkot. Since 2000, Mr Nayar had been actively participating in vigils on the Independence days of Pakistan and India, at the Attari-Wagah border.

Mr Nayar stood firmly for the freedom of press whenever there was a move to clampdown irrespective of which party was in power. A few months ago, when the BJP chief Amit Shah met him as part of his 'Sampark for Samarthan' campaign, Mr Nayar had said though he did not believe in the party's ideologies, he was willing to have a discussion.