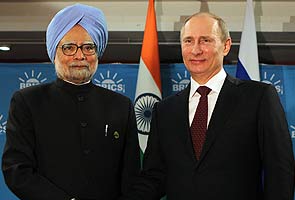 Durban: Prime Minister Manmohan Singh has assured Russian President Vladimir Putin that the first phase of the nuclear power project at Kudankulam in Tamil Nadu will be up and running by next month.

"I am pleased to inform you Mr President that Kudankulam Unit I will become operational, in particular, the very next month," the prime minister told the Russian president when they met at a bilateral meeting on the margins of the fifth BRICS Summit late Wednesday.

The first unit has the capacity of 1,000 mega watt.

The prime minister also assured the Russian president about the substantive progress being made on the other remaining phases of the joint nuclear energy programme between India and Russia at Kudankulam, near Tirunelveli in town in the southern quarters of Tamil Nadu.

"As far as Unit III and IV are concerned, we have secured our internal approvals," the prime minister said, referring to the sanction granted by the meeting of the cabinet committee on security, which he chairs.