Displaying no signs of fatigue, the women, ranging from housewives to professionals, expressed their determination to hold their ground. 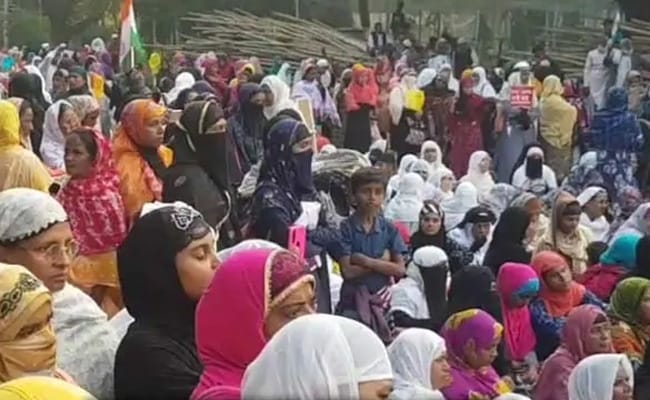 The protest at Kolkata's Park Circus Maidan entered its 23rd day on Wednesday.

A sit-in agitation by 60 Muslim women at the Park Circus Maidan, christened as ''Kolkata's Shaheen Bagh'', entered its 23rd day on Wednesday with the protestors firm to carry on with their stir against the CAA indefinitely.

Displaying no signs of fatigue, the women, ranging from housewives to professionals, expressed their determination to hold their ground.

Parveen Nazir, one of the 60 women and a homemaker, believes the biggest strength lies in the fact that the protestors are not associated with any political group.

"Our only identity is that we are Indians, and we are women, who cannot be threatened by any force," she said.

Asked about the claims of a BJP leader that the demonstrators at Park Circus Maidan and other venues across the city, protesting against the new citizenship law, were "infiltrators and not Indians", Ms Nazir said, "We have been living here for generations, participating in Durga Puja celebrations with Hindus for ages.

"Suddenly, we have to prove that we are Indian citizens."

Ms Nazir's in-laws have been residing in Beniapukur area in the city for several generations.

Another protester Nauseen Baba Khan, a PhD scholar, said, "We will not leave the place till there is a favourable decision with regard to our demand for scrapping of the Citizenship (Amendment) Act (CAA)," Mr Khan said.

A policeman posted at the site said, people turn up in droves in the evening and songs and slogans rent the air.

Singers, theatre activists and social workers have also visited the site in past few days.