The 'Bonedi Baris' or erstwhile elite households in south Kolkata immerse their Durga idols in the Adi Ganga canal, which has been plagued by pollution. 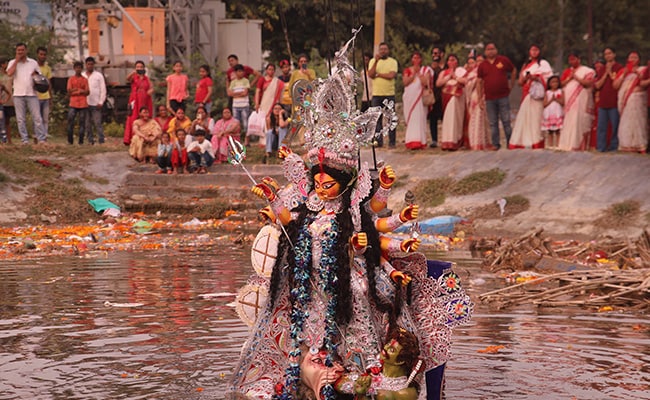 The tank was 4 feet high and 6 feet in diameter, and had two jet sprayers. (representational)

In a bid to curb pollution, the idol of a 190-year-old Durga Puja was immersed in an artificial tank instead of a water body, setting a new trend among the 'Bonedi Baris' of Kolkata.

The 'Bonedi Baris' or erstwhile elite households in south Kolkata immerse their Durga idols in the Adi Ganga canal, which has been plagued by pollution.

Anirban Mukherjee who spearheaded the environment-friendly move by his family home of Girish Bhawan said on Thursday that the idol was immersed in the water tank built in the portico of the mansion in Bhawanipur on Bijaya Dashami.

"We decided to contribute to the Ganga rejuvenation project from this year onwards, that's why we took this initiative," he said.

"Water jets were used for dissolving the idol, and the remnants were stored in sacks as those will be re-used next year for making the idol. We followed the vision of reduce, recycle and reuse," he added.

The tank was 4 feet high and 6 feet in diameter, and had two jet sprayers, Mr Mukherjee said.

The Kolkata Municipal Corporation (KMC) had last year prepared an artificial pond for pollution-free immersion but very few organisers opted for it.

Community Durga Puja committees and the 'Bonedi Baris' immerse their idols either in the Hooghly river or in nearby waterbodies. The water pollution is caused by toxic paints used in the idols, besides decorative items.

Over the last few years, the KMC has been using cranes to lift the idols from the water within minutes of immersion, to tackle pollution in the Hooghly.

Lauding the initiative of Girish Bhawan, environmentalist SM Ghosh said he was hopeful that many more households would come forward and adopt this technique next year.

"Rituals are not compromised if we immerse idols in tanks. But, we have to break certain traditions as pollution level has alarmingly increased," he said.

The Durga Puja of Girish Bhawan was started in 1832.