In yet another blow to the beleaguered saffron party in Bengal, BJP state vice-president and Barrackpore MP Arjun Singh rejoined the ruling TMC on Sunday, calling it his "homecoming". 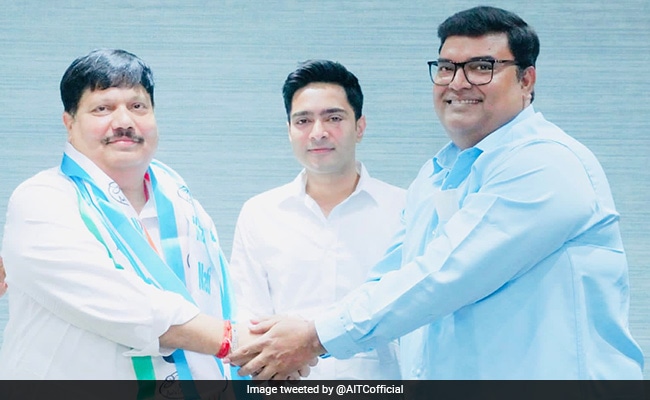 Cracks in Bengal BJP seemed to have deepened a day after party MP Arjun Singh returned to the TMC, as national secretary of the saffron camp, Anupam Hazra, called for introspection on Monday, only to draw a sharp retort from its national vice-president Dilip Ghosh, who said that "armchair" leaders should hit the streets instead of lecturing the top brass.

Hazra, taking note of Singh's exit, contended that the saffron camp needs to fix its lacunae instead of pretending "all is well".

"If someone leaves the party, you (leadership) keep saying that it won't have any impact; that is not the right approach. We have to accept that it will have an effect, and should introspect why people are leaving," Hazra, who had switched over from TMC ahead of the 2019 Lok Sabha polls, tweeted.

In yet another blow to the beleaguered saffron party in Bengal, BJP state vice-president and Barrackpore MP Arjun Singh rejoined the ruling TMC on Sunday, calling it his "homecoming".

Hazra, who has been training his guns at the state leadership for failing to keep the flock together, maintained that a senior member quitting the camp is bound to have an adverse impact on the party, which had a tough time clinching wards in municipal elections.

"We should accept the reality; disregarding it won't serve any purpose. The approach that 'all is well' is not right. The reaction that someone leaving won't have any impact is wrong. This exodus that began after last year's assembly polls is still on. There should be a proper analysis to find out what is wrong," he later told a news channel.

Hazra's remarks drew a sharp response from Ghosh, who said that those criticising the state unit of the BJP should first introspect and find out what have they done for the party”.

"Instead of giving sermons, I would ask them to first introspect about what they have done for the party and what the party has done for them. How many movements have they been a part of in the last one year? Those who are more interested in air-conditioned room politics should not lecture others," he said.

Amid the internal bickering, the party's state unit on Monday held a brainstorming session to discuss ways to maintain unity and address the grievances of disgruntled leaders.

The closed-door meeting at a hotel in Newtown was attended by state BJP president Sukanta Majumdar, Leader of Opposition in West Bengal Assembly Suvendu Adhikari, party's co-in-charge Amit Malviya and other senior leaders.

"During the meeting, a lot of issues were discussed. Senior leaders from our Barrackpore unit were also present. The issues discussed focused on the recent exit of leaders and the gaps that need to be filled within the camp," a state BJP member said.

According to sources in the BJP, Adhikari has been given the responsibility of the Barrackpore organisational district, and he will hold a meeting with local leaders on May 25.

"Those who wish to stay close to the seat of power are free to leave the party, but we need to stand by our dedicated workers. If there are any genuine grievances, those have to be addressed. We can't help if someone has decided to quit the party," the veteran member said.

Speaking to reporters, the Barrackpore MP lashed out at the saffron camp, and said that it should shun "armchair politics". He also said that his son Pawan, BJP's Bhatpara MLA, would soon follow in his footsteps.

"BJP's presence is limited to Facebook and social media. It is not bothered about building the organisation. The party has lost its chance in Bengal. The TMC will sweep next year's panchayat polls in the state, and there will be no violence," he claimed.

Reacting to his remarks, BJP state spokesperson Samik Bhattacharya said, "It only shows his (Singh's) lack of political understanding. By saying there won't be any violence during the panchayat polls, he has virtually agreed that the TMC resorts to strong-arm tactics during elections," Bhattacharya said.

Several BJP leaders since last year have switched over to the TMC, including former MP Babul Supriyo and five legislators -- one of them being veteran leader Mukul Roy.

"Have To Defeat Hate Together": Rahul Gandhi After Udaipur Murder