Around 90 per cent of Kerala's Covid positive cases have mild and asymptomatic infection, Covid experts said. Most patients are under home quarantine. 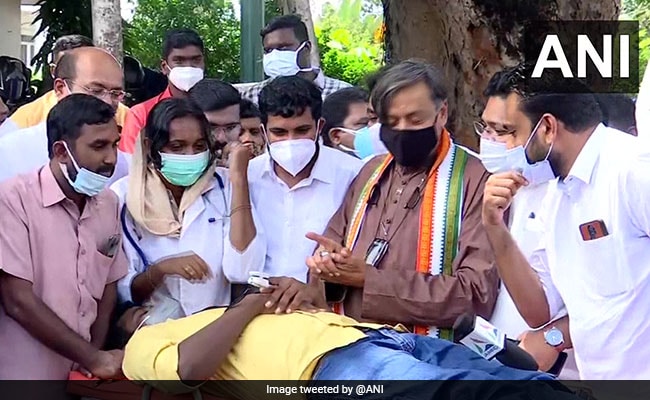 Shashi Tharoor protested against the Pinarayi Vijayan government's alleged mishandling of the pandemic.

The post-festival Covid surge in Kerala has the Centre worried and the state opposition up in arms. The "Onam spike" was today reviewed by the Union Home Ministry, focusing on the containment strategy being followed in the state even as the Congress party criticised the alleged mismanagement of the situation by Chief Minister Pinarayi Vijayan's government.

Yet, around 90 per cent of Kerala's positive cases have been mild and asymptomatic, according to Kerala Covid experts. Thus, most cases are under home quarantine -- the reason the state's health infrastructure is not overwhelmed despite the high number of cases.

However, with the number of fresh cases getting pushed to a three-month high, Union Home Secretary Ajay Bhalla spoke to the state's Chief Secretary and Health Secretary today.

Mr Bhalla stated the need for adequate intervention in geographical areas having higher infection, through measures such as contact tracing, vaccination drives, and Covid-appropriate behavior, according to a release from the ministry. He suggested exploring the possibility of placing night curfew in areas of high positivity, it said.

"Focus should also be placed over the next few months to suppress the levels of transmission of the virus so that the chain of transmission can be controlled more effectively," the release said referring to the Centre's advise to Kerala.

A Central team that visited the state recently had flagged issues relating to the state's containment strategy. It may send another team in connection with this.

Kerala has seen over 30 per cent jump in cases in the past 24 hours. At present, it is the highest contributor to the national number.

What was worrying the Centre the most, according a senior Union Home Ministry official, was the fact that since the last week of July, Kerala has been seeing a steady surge.

"A central team…found a lax containment strategy being adopted," the official told NDTV.

The panel also flagged low seroprevalence, implying that a relatively lower segment of the state's population had contracted the virus till then, along with a significantly high number of senior citizens -- all contributing to the spike.

Union Health Secretary Rajesh Bhushan, too, was scheduled to hold a virtual meeting with the state's officials today.

The state opposition has severely criticised the Pinarai Vijayan government as the number of cases spiral.

Shashi Tharoor, the Congress's Thiruvananthapuram MP, joined a protest in the state capital today to highlight the administration's failures on this front.

"This is a symbolic protest to show that Kerala is in ICU and before it gets carried away in an ambulance the government needs to take action," he told a gathering of protesters.

V Muraleedharan, the Union Minister of State for External Affairs and Parliamentary Affairs, said the state government had used the pandemic for political gains.

"The Kerala government is not doing enough contact tracing. It needs to trace 30 contacts for every positive case but is actually doing only 1.5. It relaxed covid restrictions for political reasons, while it should have followed scientific advice," said the senior BJP leader from Kerala.

However, Dr TS Anish, a member of the state's expert committee on Covid, had a different take on the matter of contact tracing. He said the Delta variant, which has been found in Kerala, has a short incubation period of around 3.5 days.

"That means as soon a person in a family tests positive, if you test the other family members, they are also found to be positive. Very rapidly family clusters are formed," Dr Aneesh said.

"In September 2020, for one positive person in the family, all others in his family would be contacts. Now, for a family of five, if 10 outsiders are contacts, then for each positive person, the contact is only two."

Health economist Rijo M John pointed out that Kerala had already vaccinated 75 per cent of its adult population with at least a single dose.

#Kerala has already vaccinated 75% of its adult population with at least a single dose (one of the highest in India).

55% of its entire population has received at least a single dose, again one of the highest.

This may be a saving grace this time in terms of fatalities.

"With cases expected to cross 40,000, the deaths may increase in the coming days too. But, vaccinations may be a saviour this time around," he tweeted.