Union Minister Prakash Javadekar claimed that the BJP manifesto is progressive, dynamic and development oriented and Kerala was awaiting such a manifesto. 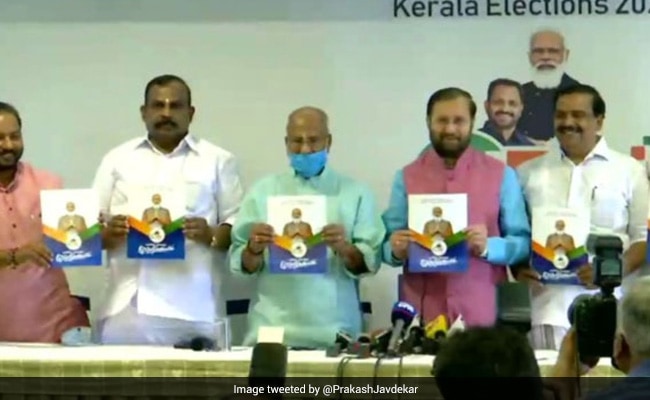 An array of promises from legislations for Sabarimala and against religious conversion, employment for at least one person from each family and free laptops to high-school students, among others, have been listed in the poll manifesto of the BJP-led NDA for Kerala assembly elections, released by Union Minister Prakash Javadekar today.

Mr Javadekar claimed that the BJP manifesto is progressive, dynamic and development oriented and Kerala was awaiting such a manifesto.

Attacking the Left-ruled state government, Mr Javadekar said there was an attempt to hijack Prime Minister Narendra Modi's projects and use it in Kerala with minute changes and present them before the people in a new form. "Our manifesto is progressive, dynamic, aspirational and developmental oriented. Kerala was waiting for such a manifesto."

BJP will register a good win in Kerala as the people are frustrated with both the CPM led LDF and the Congress led UDF.@BJP4Keralam@BJP4Indiapic.twitter.com/1uU0cvR6DE

"As to the key points, the manifesto guarantees employment to at least one from each family, terrorism-free Kerala, hunger-free Kerala, Sabarimala legislation (to protect the traditions of the hill shrine), free laptop to high school students, Love jihad legislation," the minister said.