Kathua Rape and Murder: The Jammu and Kashmir police have filed a case against the lawyers who tried to stop them from doing their job 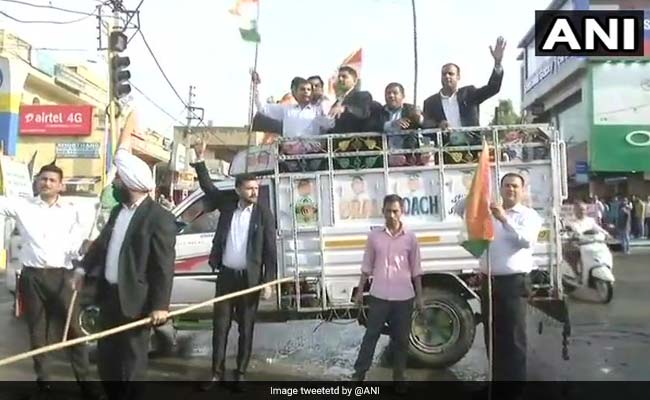 Lawyers of Jammu Bar Association had tried to stop the crime branch from filing a charge-sheet on Monday.

Kathua, Jammu: Several lawyers of the Jammu Bar Association protested outside the district jail and tried to stop the crime branch from filing a charge-sheet on Monday against seven of the eight accused in the murder and rape of an eight-year-old nomad girl from Jammu and Kashmir's Kathua. It was only after an hour that the crime branch was able to get in, but it took the Chief Judicial Magistrate almost six hours to accept the charge-sheet, that too after the intervention of the Jammu and Kashmir law minister.

The Jammu and Kashmir police have filed a case against the lawyers who tried to stop them from doing their job. The Bar association, with some of its members closely linked to the state BJP, has been batting for the accused and demanding a Central Bureau of Investigation (CBI) probe into the case.

The lawyers have called for a Jammu bandh today. "We have called for a strike and have got support from many organisations. The crime branch team has officers from Kashmir who don't have a good track record. Therefore, we want a CBI inquiry," said BS Salathia, president, Jammu Bar Association.

However, Chief Minister Mehbooba Mufti's Peoples Democratic Party (PDP) maintains that the state police force has competently handled the investigation. "We do not support a CBI probe. Our police officers are competent. They are fighting militancy professionally, how can they not investigate the crime against an eight-year-old girl? They have done the investigation, it is for the court to decide now," said Rafi Mir, chief spokesperson, PDP.

The girl was kidnapped on January 10 after which she was allegedly drugged and raped. Her mutilated body was found on January 17. Forensic tests have confirmed she was brutalised for a week before she was killed. The Crime Branch investigation is being monitored by the Jammu and Kashmir High Court and the probe agency has been submitting status reports to the court.

In January, two BJP ministers in the state government, forest minister Lal Singh and industries minister Chander Prakash Ganga supported a local group, the Hindu Ekta Manch, which took out a rally with the national flag claiming the arrests to be a "targeted attack against Hindus". Ms Mufti had hit out at them exposing the deep fault lines between PDP and its ally BJP. She had said she was "appalled by the marches and protests in defense of the culprits in Kathua".

Former Chief Minister Omar Abdullah appreciated the way the state police handled the lawyers' protest on Monday and tweeted, "While appreciating action by @JmuKmrPolice against the Kathua mob masquerading as lawyers let's not forget the mob were emboldened by the actions/words of two BJP ministers in @MehboobaMufti's cabinet. What about action against them?"

The state BJP says they also want the culprits behind bars, but they aren't satisfied with the probe by the crime branch.

"Whosoever has committed this crime must be punished, but there hasn't been a free and fair investigation. A faulty probe won't deliver justice to the victim, which is why we have been demanding the CBI to be given the responsibility to investigate. Why should anybody have problem with that?" said Sunil Sethi, state BJP spokesperson.

Promoted
Listen to the latest songs, only on JioSaavn.com
Eight people have been arrested in the case, including two special police officers, a police head constable, a sub inspector, and a juvenile. One of the accused, Sanji Ram -- a retired government officer and also the custodian of the "Devasthan", a religious place in Rasana village where the girl was held captive before she was killed -- surrendered to the police.

According to crime branch officials, Sanji Ram engineered the rape and murder of the child to drive out Muslim nomad families from Jammu's Rasana village. He had allegedly "motivated" Deepak Khajuria, a special police officer and the 19-year-old main accused in the case.
Comments
Kathua nomad girl murderKathua rape and murderkathua lawyers