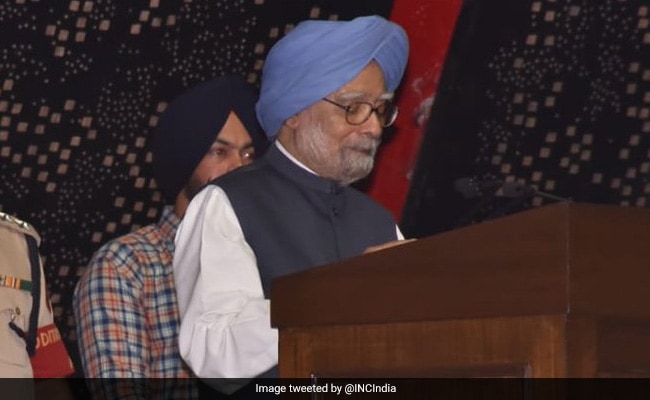 Manmohan Singh said sectarian violence was the biggest challenge faced by the world.

Vice President M Venkaiah Naidu too said a new world of peace and sustainable development could be founded if teachings of the Sikh Guru were integrated in daily lives.

"Peace and harmony is the only way forward to ensure a prosperous future. The Kartarpur model may be replicated in future too for lasting resolution of conflicts," the former PM said.

Dr Singh also appealed to take forward the message of mutual love and respect propagated by the Guru to ensure an equitable society.

"Guru Nanak Dev Ji's eternal message of oneness of god, religious tolerance and peace can pave the way to end sectarian violence", Dr Singh said, adding that it was the biggest challenge faced by the world.

"Punjab is Guru Nanak Devji's karmabhoomi. How will we keep Guru Nanak Devji's legacy alive if its youth is wasted with drugs, water is becoming poisonous and women are being disrespected. It is the most crucial question on his 550th birth anniversary," the former PM added.

Addressing the session, the vice-president described the Sikhism founder as one of India's most democratic spiritual leaders.

Mr Naidu said his vision "had as much relevance today as it was when it was expounded five centuries ago".

He said for the first Sikh Guru, differences based on caste, creed, religion and language were irrelevant.

"Our world view has been continually broadened by timeless messages of enlightened pathfinders like Guru Nanakji. We, as democratic political leaders, and even as common citizens, have so much to learn from the teachings of this great personality," the Vice-President said.