BJP Lawmakers Sleep Over At Karnataka Assembly To Protest "Bias"

BS Yeddyurappa said the Congress-JDS government was reluctant to face the trust vote because it does not enjoy the confidence of either the people or the assembly.

BJP chief BS Yeddyurappa sleeping on the floor of the Karnataka assembly.

Karnataka BJP chief BS Yeddyurappa staged a night-long protest along with party lawmakers in the state assembly on Thursday, alleging that the Congress-Janata Dal Secular (JDS) government was trying to delay a trust vote in which it was "sure to lose".

"This government has lost its majority. They tried to drag their feet on the issue and provoke us, but we acted with patience. We will continue to press for a trust vote on the motion. We will stage a night-long dharna in the House," news agency ANI quoted him as saying. The announcement came soon after Speaker KR Ramesh Kumar adjourned the assembly in the midst of a heated confidence motion debate.

Eighteen legislators had absented themselves from the house as it took up the vote of confidence for debate earlier that day.

According to the BJP leader, the Congress-JDS government was reluctant to face the trust vote because it does not enjoy the confidence of either the people or the assembly. "The Chief Minister is reluctant to take up the motion because he has only 98 legislators while we have 105," he said. 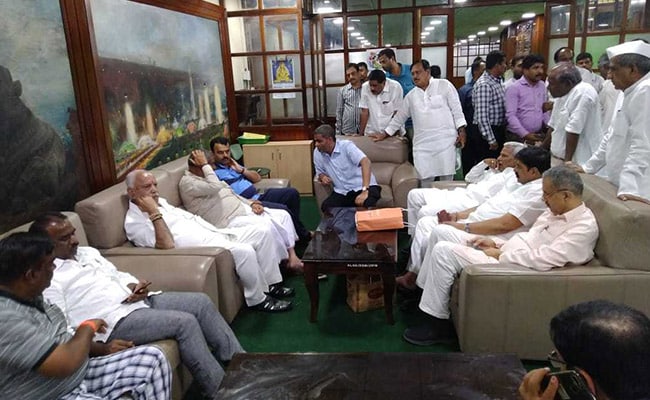 Yeddyurappa discussing strategies with party lawmakers before finally calling it a night.

Although Governor Vijubhai Vala had directed the Speaker to complete the business of trust vote by the end of the day, no such outcome materialised in the hours that followed. "I cannot blame the Speaker. Public perception is that procedures are not happening according to the rules, and very biased things are being done. Let us wait for the decision he takes with regard to the Governor's letter, among other issues," Mr Yeddyurappa said.

Meanwhile, photographs that came in late at night showed some of the BJP lawmakers holed up in the state assembly engaging in hectic discussions with Mr Yeddyurappa. A couple were seen gorging on food brought in, while yet another was spied catching some shuteye on a mattress laid out on the floor. Friday was going to be another big day, after all.

As many as 16 legislators from the ruling coalition - 13 from the Congress and three from the JDS -have resigned over the last few weeks. This development, combined with two independent candidates withdrawing their support, has put the ruling coalition in a precarious position. The BJP now has 107 legislators with the support of two independents, while the JDS-Congress tally could well plummet to 100.

1 Soldier Killed In Action, 9 Injured In Maoist Attack In Chhattisgarh